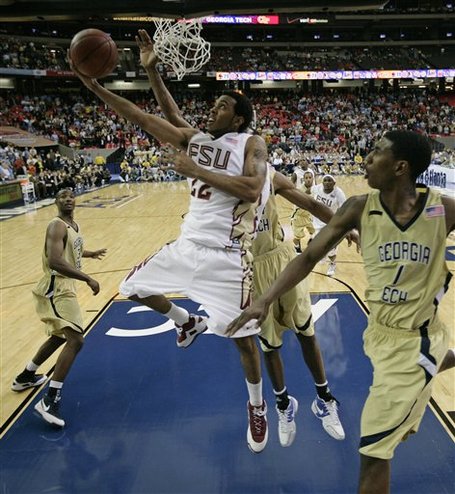 After a fantasic, albeit controversial, finish to the first game of the day, it was no surprise that the second quarterfinal between the Georgia Tech Yellow Jackets and Florida State Seminoles went down to the wire.

In a game that was a slugfest from the get-go, the officials opted to let both teams play. Florida State shot just six free throws on the day and both teams combined for only two more free throws than UNC shot in their game earlier today.

The game was close the whole game, with Florida State leading by as much as 10, but every time they went on a run, Georgia Tech answered right back, meaning that both the Tech fans and the remaining Carolina fans in the building were cheering loud. With just under 30 seconds remaining, Zach Peacock put GT up one on a gutsy shot over his defender, just his second basket of the game.

Florida State seemed to panic a bit and got it to Toney Douglas in the corner who was trapped, but he wisely called timeout allowing Head Coach Leonard Hamilton to draw up a play.

That play went away from Douglas, who GT keyed on, and to Derwin Kitchin, who curled around a screen and took it right to the rack for a score and one, putting FSU back up two.

Iman Shumpert took the ball with seven seconds left and got a great look at the hoop but it rattled off the back iron and out and as he collapsed to the floor, Florida State celebrated.

Lewis Clinch was red hot the last month of the season and, after scoring 32 in the win against Clemson, followed that up by putting up 25 points today. The real ACC Player of the Year, Douglas, went 11-16 from the floor and matched Clinch with 25 of his own.

Freshman Solomon Alabi had 14 points on 7-10 shooting and pulled down six big rebounds. On the other side, Gani Lawal had 11 and seven and Iman Shumpert had 11, five rebounds, two assists and four steals.

The 'Noles certainly earned the right to play UNC tomorrow, who might be without Ty Lawson again as Roy Williams mentioned that he is feeling better but still is uncertain. A Lawsonless Heels team might be challenged by FSU, who slows the tempo down to begin with and provides a lot of size and matchup problems for UNC. It should be a heck of a semi-final.