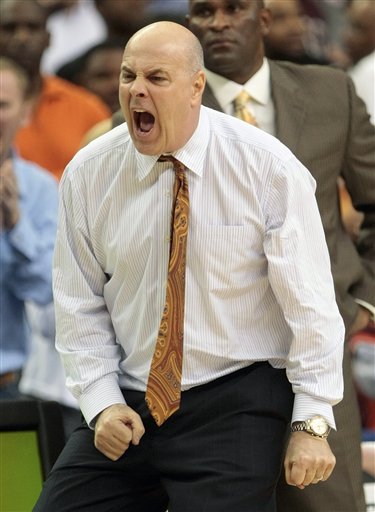 It's becoming old hat for Virginia Tech: take a lead, stay close and lose a heartbreaker at the end. In today's quarterfinal match-up against North Carolina, it was the same result.

"In the last 24 hours our theme has been same story different ending," Virginia Tech Head Coach Seth Greenberg said, "but unfortunately it was the same ending."

That same ending has happened 10 different times this season. The Hokies have lost 10 times by less than 10 points and have continually lost in cataclysmic fashion.

This game, they led by one and allowed Tyler Hansbrough to get a putback before having the ball and the last shot--only to have J.T. Thompson tied up for what was deemed a held ball.

When asked about what he thought about the call, Greenberg said, "The only people that count are the ones in the striped shirts and what they saw is what happened."

After a pair of Hansbrough free throws, A.D. Vassallo, who could not be stopped by UNC defenders but was stopped by foul trouble, put up a good look from three to tie the game, but it sailed long and UNC came out victorious.

Vassallo had 26 points and 10 rebounds, but every time he would put together three or four buckets in a row would have a foul called against him and he would have to sit. Malcolm Delaney did his best to pick up the slack, with 17 points and 10 assists.

Hansbrough had 28 points and Ellington contributed 16 on 4-7 three-point shooting. Danny Green had one of his worst nights in recent memory, shooting 2-13 and 1-7 from beyond the arc. The Tarheels were without Ty Lawson and their speed suffered--the Heels had just five fast break points on the night.

"It's not like they're devoid of players," Greenberg said. "They have a lot of players--The Player of the Year is out and you put a McDonald's All-American in."

That's what makes UNC so dangerous--it's easy to say how "good" Lawson or Hansbrough are, but they are a team filled with talent. Ellington, Green, Thompson, Ed Davis, even Bobby Frasor, Larry Drew and Tyler Zeller were all highly touted blue chip prospects. So don't go feeling too sorry about Lawson being out--Roy probably did it on purpose and the Heels don't exactly deserve any sympathy.

For Virginia Tech, it's another season and another disappointing finish for a team that came just short of an NCAA Tournament berth. You have to feel for a guy like Vassallo who did so much for his team in his career and went to just one NCAA Tournament. The Heels will take on the winner of the GT-Florida State game tomorrow at 1:30.