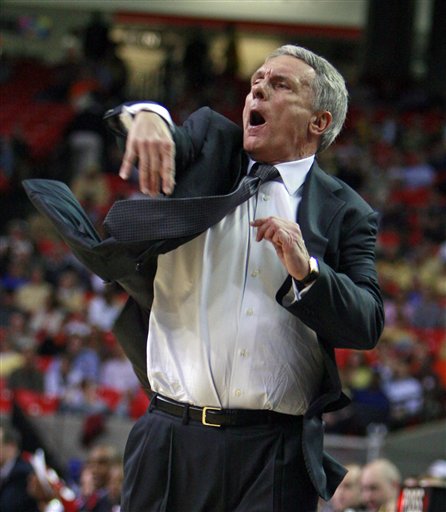 Obviously this game had a lot of weight seeing as the winner plays the Deacs tomorrow and that put more emphasis on the outcome. That doesn't mean that it was the best ACC Tournament game I've ever seen...

This was an ugly game all around. Both teams plodded and made poor decisions and shot selections. At the end though, Eric Hayes' 21 points on 5-6 three-pointers and 6-8 free throws and Greivis Vasquez's 17 points, 10 assists and four rebounds were too much for the Wolfpack.

The Pack got a combined 2-15 performance good for 9 total points from Brandon Costner and Courtney Fells. Not exactly what you would be hoping for from two of your court leaders. State was paced by a great effort from Ben McCauley (7-10 shooting, 14 points and seven rebounds) and a career game from Julius Mays--18 points.

NC State was able to stay in it midway through the second half, even leading 62-61 at one point. They were unable to get any offense going after that though, allowing Maryland to go on an extended run that basically put the game away.

Vasquez, who announced today that he was going to declare for the NBA draft, tied his career high in assists and only had two turnovers. He looked poised and focused, but his words about the Demon Deacon defense after their loss in College Park makes for good bulletin board material.

The Deacs know what is at stake, especially with Pitt, Kansas and Oklahoma going down today. Not only is the battle for Greensboro still up for grabs, but there is a potential number one seed on the line if Wake could pull out a miracle ACC Tournament Championship. To get there though, they have to go through the Terrapins who gave the Deacs a run for their money just recently.

Wake will need to play solid defense and get the ball inside early and often. They absolutely must seal off Dave Neal and Eric Hayes from getting open opportunities and just make Greivis beat them--play him like everyone else and shut down the rest of the Terps and beat up on Maryland inside. This is a game Wake should win. Now they need to go out and do it.