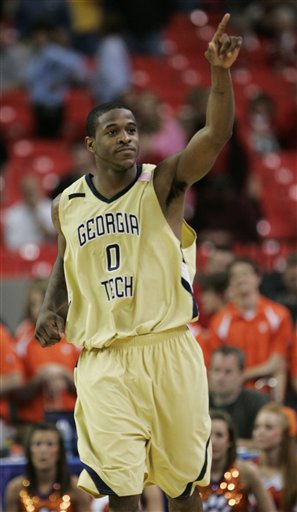 Georgia Tech and Head Coach Paul Hewitt, who had won only three games in all of 2009, knew that the ACC Tournament is a welcome fresh start. Using that logic and the magic that Georgia teams have seemed to have in the Georgia Dome the last two years, the Yellow Jackets were able to blitz the Clemson Tigers by a final score of 86-81.

Behind a career-high 32 points from Lewis Clinch, and a maskless Maurice Miller, who provided eight assists, the Yellow Jackets used solid defense and effectively broke the Clemson press to give the 12 seed in the ACC tournament their third win against the five seed in the last four seasons. TO, fresh off his contract signing with the Buffalo Bills, was in attendance and was just munching on some popcorn during the game.

Georgia Tech did an incredible job down low, with 42 points in the paint and 22 second chance points, but set the tone with 33 fast break points--showing just how much of a double-edged sword Clemson's press has been all year. When it works, it works well, but when teams break it consistently, the defense has no time to get set and guys can get free for uncontested look, something that Gani Lawa used time and again on his way to 20 points for the game.

I've said it all year, but it bears repeating: Georgia Tech is not a bad basketball team. Lawal, Clinch, Zach Peacock, Iman Shumpert, Miller and Alade Aminu are all good ACC players. I joked with Dan Collins after the game and he said that this year's Tech team just might be the best two win ACC team ever.

The game came down to the wire, as Clemson caught fire from deep near the end, paced by Terrence Oglesby who was just launching it near the end of the game. He finished with 11 points, as did K.C. Rivers, Demontez Stitt and Raymond Sykes. Trevor Booker finished with 17 points and nine rebounds. Clemson, who backed into the tournament after losing four of their last five conference games, continued their woes, and has seen their NCAA seeding plummet in the last two weeks. It will be interesting to see what their seed ends up being and whether or not they can bounce back come next week.

For Georgia Tech, their next foe is Florida State, who they match up well against, and hey, in the ACC Tournament, anything can happen, especially in the Georgia Dome.

I'll be back to talk about tonight's games, but leave your impressions about the first half of Thursday's action below.