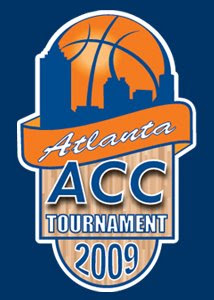 As fans of the ACC turn their eyes to Atlanta, there are many questions that will be answered over the next few days.  Will Miami, Virginia Tech or Maryland make their case for a bid to the Big Dance? Will it be Duke or Wake Forest that is able to grab the two seed in Greensboro?  Can Clemson or Florida State make some noise and improve their seeding dramatically?  Most imporantly, who will get to hang the banner and have bragging rights as 2009 ACC Champions?  Click through for a quick overview of the pairings and likely senarios that we may see before the brackets are revealed Sunday night.

The first game that tips of from the Georgia Dome on Thursday is likely the biggest game of the day.  Virginia Tech and Miami both have the capability to be very good teams when they are firing on all cylinders and are each led by a tandem of great players.  Virginia Tech has the smooth stroke of AD Vassallo and a do-it-all sophomore point guard in Malcolm Delaney.  Miami is led by sensational senior Jack McClinton and a rugged forward by the name of Dwayne Collins.  Whoever is able to win this game will get a shot at North Carolina, who may be without ACC Player of the Year Ty Lawson due to a lingering toe injury.  Both teams played UNC well in the regular season and would be playing for their NCAA tournament lives, while Carolina may be coasting with a #1 seed pretty much wrapped up.  Do not be surprised if VT or Miami is able to pull the upset.

The second game features a Clemson team that struggled down the stretch after smashing Duke at home and the hometown Georgia Tech Yellow Jackets who will try to play tournament spoiler.  The Rambling Wreck had a rough season, but showed some promising signs in their last two games as they defeated Miami and played BC tough on the road, losing on a fade-away baseline jumper by Rakim Sanders at the buzzer.  It will be interesting to see if Clemson can regroup now that it is do-or-die time.  They certainly have the horses to get past GT and Florida State and make it to the semifinals for another potential shot at North Carolina.

In my estimation, the other half of the bracket is not as strong.  Clemson, VT and Miami are all dangerous teams that did not earn a bye and are better than the BC, Maryland and NC State draw on the bottom half.

The first game in Thursday's evening session features the Terps and Wolfpack as they try to earn a date with our Demon Deacons on Friday evening.  Maryland won a back-and-forth game against N.C. State in Raleigh at the end of the season before falling apart down the stretch against Virginia and Wake Forest.  Despite their record, N.C State played much better at the end of the season and always seems to play well in the ACC Tournament.  From a Wake Forest prospective, a matchup with either team will be no easy assignment.  Maryland would be looking to avenge a game that they had in hand early against Wake while NC State has already beaten the Deacs once and played them tough in Winston-Salem.

The nightcap features the Eagles of Boston College against the Cavaliers of Virginia.  Boston College should take this game behind the strong play of Tyrese Rice and Rakim Sanders, with another chance to upset Duke looming on Friday.  Virginia is no pushover though, just ask Clemson and Maryland.  Freshman of the Year Sylven Landesberg will be ready to shine in his first appearance in the ACC Tournament and could come out with a win if the Eagles are looking past the Wahoos.

Looking ahead a bit, if Wake and Duke are lucky enough to survive on Friday, it sets up a huge semifinal Saturday game.  Whoever wins that game would not only have a shot at the ACC title, but would likely stay home and play in Greensboro in the first two rounds of the NCAA tournament.  The teams split their regular season matchups and the rubber match would likely come down to the wire again.

Sit back, grab some wings and get ready for another great ACC Tournament in Atlanta.  You never know when the next Randolph Childress will arise....

Randolph Childress - The Shot (via WakeWacko)