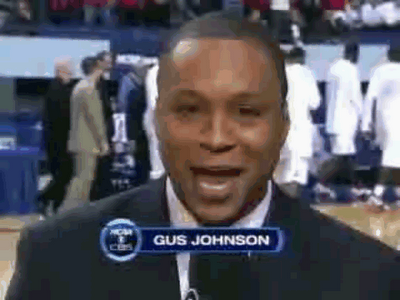 It's that time of year again.  That's right, time to watch four college basketball games at once and for Cinderella to see if the slipper still fits.  Undoubtedly, Championship Week and the first Thursday through Sunday of the NCAA tournament are my favorite weeks of the year.  Sometimes on these glorious days there are several close games on and you are not sure which one to watch.  My suggestion:  Follow these rankings and watch the announcer that will maximize your entertainment potential.

First off I would like to note that Jay Bilas has been disqualified from these rankings from his continuous rambling about Tyler Hansbrough and Marcus Ginyard.  Jay, we know that Tyler has incredible will, works hard, never quits, etc etc.  Moreover, Ginyard does not walk on water and would not have allowed Carolina to be undefeated.  It takes five guys to play defense, so the other four guys on the floor would have still sucked on that end.  Do not even get me started on Lawson making the honorable mention All-ACC defensive team...

Now that I have that brief rant out of the way, let's get to the important stuff.  I understand that some of these analysts are primarily ESPN guys and may not be signed on by CBS to call the tournament, but I felt that I needed to encompass the announcers that I have listened to for the entire regular season.

We'll start off with the top six play-by-play guys and move on to the color analysts:

6) Brad Nessler - I have grown to like the Nessler-Dykes team a lot.  Brad is not the best play-by-play guy, but is very solid all around and seems to have good chemistry with JD.  He does not really have any catch phrases that I am aware of, but he did sing Dream Weaver.  That locked it up for Brad.

5) Dan Shulman - Again, not the most flashy guy but is consistently good.  As the voice of the Big East and Big Monday, he has the privilege of working with some of the great color guys that I will discuss later.  When I think of Dan, the first moment that comes to mind is Gerry McNamara's magical Big East tournament run with Syracuse.

4) Brent Musberger - Folks, you have to love him just for pure entertainment purposes.  Any guy that has a drinking game made entirely for his commentary has to be on the list.  He gives us gems such as the aforemented "folks" as well as
"we've got a good one brewing, pardner."  You just can't leave out the classics.

3) Tim Brando - When I first started listening to him a couple years ago I was not really sure if I could even stand him.  However, his Sunday Night Hoops calls have grown on me tremendously.  He brings great enthusiasm to the game and is never hesitant to say "the iron unkind!"

2) Jim Nance - After listening to him call the Final Four during my entire lifetime, the game just feels bigger when he is calling it.  As the signature guy for CBS, Nance does a great job all-around and has never frustrated me during his games.  The atrociousness of Billy Packer has often overshadowed the greatness of Jim, but I feel that he will shine through when he tries to bring Clark Kellogg up to his level in Detroit.

1)  Gus Johnson - If you did not know who was going to be number one, may God have mercy on your soul.  Gus Johnson is the greatest thing that has happened to college basketball since James Naismith.  Gus even manages to make Big Ten basketball watchable, which is quite an enormous task.  From "Rise and fire!" to "with the runnerrrrr" to "HA HA young man" Gus is consistently awesome.   Please watch the following three videos for more great Gus moments:

If Gus has not drained your energy after those, allow me to continue with my color commentator rankings:

Honorable Mention:  Len Elmore, Marques Johnson, Clark Kellogg, Doug Gottleib (I like the way he just tells it like it is)

6) Dick Vitale - I know this will upset a lot of people, but you have to admire Dickie V's passion for the game.  He just loves college basketball and does not hide his emotion at all.  Yes, he does talk about Duke and North Carolina too much, but they have been on top of the game for a while so it is not entirely undeserved.  I also enjoy watching Dickie V yell at the selection committee every year during ESPN's selection show special.  He is a hall-of-famer for a reason and you have to admire his love for the game.

5) Fran Fraschilla - Most importantly, he knows the game very well and provides interesting insight that many analysts do not provide.  You may know him as the guy who knows absolutely everything about every European player drafted during NBA draft coverage.  Again, Fran is just solid all around and I really enjoy listening to his commentary. The only negative here is that he is sometimes too eager to agree with the refs when there is an obvious bad call.

4) Stephen Bardo - Bardo is always good for at least two "wooooooooooooo"s during the game.  He fills the void that has been left since Brad Daughtery's exit to cover Nascar (major WTF there) by sounding almost exactly like him.  While he is not quite as good as Brad was, Bardo is fun to listen to and brings some enthusiasm with his calls.  I cannot complete this article without mentioning one of my favorite calls of all time, which was by Daughtery - "I don't know who brought the peanut butter, but I know who brought the jam!"  Basically, Bardo is good at sounding similar to Mr. Nascar.

3) Dan Bonner - Oh my!!!!!!  While he may have stolen that line from Dick Enberg, I love Dan Bonner.  I feel that many will disagree with me here too, but I have a theory behind my Bonner man-crush.  Growing up on Tobacco Road and watching Raycom for many  years, I cannot think of the ACC without thinking of Dan Bonner.  He is not afraid to yell when a big play happens, which is obviously a big plus in my book.  In short, Dan Bonner's voice brings back memories from throughout my childhood and I can't imagine ACC basketball without him.

2) Jimmy Dykes - This guy is just fun to listen to.  Dykes brings excitement to any coliseum and has fun out there.  I believe he is responsible for another one of my favorite calls, which came after a big Deron Washington dunk for Virginia Tech - "Do the Hokie Pokie and turn yourself around!"  He also had a good time at the Indiana @ Wake game this year.  If you are not on the Jimmy Dykes bandwagon yet, you should be.

1) Bill Raftery - This was again an easy selection for number one.  Raftery has several awesome go-to phrases and can make any game entertaining as well.  My favorite is obviously  "ONIONS!," which I have worked into my own game-watching vocabulary.  Other favorites include "man-to-man," "with the kiss!," "a little nylon!" and of course "SEND IT IN!"  Basically, if you get the chance to see a game with Raftery and Gus Johnson, it is a necessity to watch. Here are a few of my favorite moments:

Send it in Jerome! (via pauly0)

Two guys to stay away from at all costs:  Mike "the Hindu" Patrick and Mike Gminski

Now that you have seen my rankings, let me know who you think I missed or just totally misplaced.  Happy game-watching!