Share All sharing options for: Wake Shoots Down Eagles 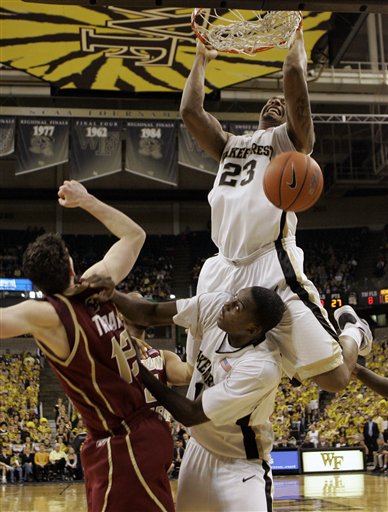 That's what I'm talking about.

The Deacs, down one and out-rebounded by 10 in the first half, came out in the second half and established why they still are one of the most talented and dangerous teams in the country.

By using a mixture of strong defense, transition and fast-break buckets, and good ball movement into the post, the Deacs blasted through Boston College and won by a final score of 93-76.

Head Coach Dino Gaudio joked after the game that his wife told him not to put too much pressure on the guys. He then said he told them that this was a pressure game. Every game is a pressure game in the ACC. This was their season.

And in a situation in which BC was streaking, winning five in a row, and the Deacs were reeling and at risk of falling to 4-4 in conference, Wake Forest settled down and got back to their strengths.

more after the jump...

How did they do it?

Jeff Teague got back to what he did best, scoring. He hit threes, drove the lane, got to the line and finished with 27 points. He had 21 at half, so he decided to get others involved--with 8 assists in the second half, including a behind-the-back pass that became a Tony Woods dunk.

Speaking of Tony Woods, give it up for the big fella. In another night where Chas McFarland was ineffective--missing shots and getting himself into foul trouble--the freshman had eight points and some big rebounds, as well as some really nice hustle plays, keeping possessions alive and the ball inbounds. He has been up and down his freshman season, but there is no questioning the fact that the upside is there and that Woods is going to have a strong career when it's all said and done.

That other freshman on the Demon Deacons only had his career high in points with 26. Aminu was everywhere in the second half, and he finished the night 8-9 shooting with a three-pointer and seven rebounds. He also hit 9-11 FTs (The Deacs shot 83.3% on the night--a good sign). Aminu's at his best when he's around the hoop, and he was flying all over tonight, off some nifty looks from Teague.

James Johnson played incredible defense on Rakim Sanders, who went 0-7. Johnson had one of his stat-filling nights, with 12 points, 10 rebounds, two assists, two blocks and two steals. Ish Smith also played great defense on Tyrese Rice, as Rice finished with 18 points, but he was clearly bothered by Smith's defense.

L.D. Williams brought his game too, playing solid D on Joe Trapani in the second half. He also had a top-10 nominee-type play on an inbounds, throwing the ball off of the defender's back, collecting it and dunking.

This was a game the Deacs desperately needed and it is good to see them respond after the troubles of the last two games. They will face an NC State team that is having a rough go of it right now. They blew a huge lead against Virginia Tech today and ended up losing in OT. The Wolfpack always give Wake Forest fits and in the last few years, State has had Wake's number.

This win sure feels good though. Maybe the sky isn't falling after all.