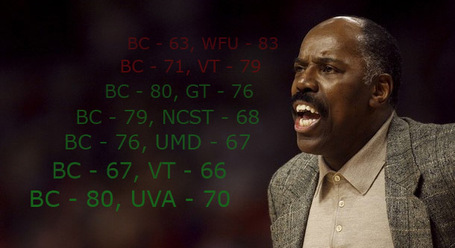 Oh, how the tides have turned.

Al Skinner's Boston College team lost by 20 to Wake Forest just 32 days ago, but you would never know it by the way they're playing now.  After winning five straight, the Eagles are poised to get payback on a Demon Deacons team which has lost two in a row after defeating then #1 Duke on January 28.

Sound familiar?  It should.  It was Wake Forest who was riding a big winning streak when they went into Chestnut Hill to play a BC squad who had just lost two straight after beating then #1 UNC.

What a difference a month can make…

BC's offense is averaging 75.5 PPG in their past six, since only putting up 63 against Wake.  And after letting the Deacons score 83 on them, the Eagles have only allowed 71 PPG, including four straight of 70 or less.

And then there's Wake Forest.

The Deacs' offense is getting seemingly worse as the ACC season progresses, scoring less than their prior game in four of the last five, hitting rock bottom with a 52 point egg this past Wednesday.  Meanwhile Wake's defense just allowed its highest total since the Deacs played UNC four weeks ago. 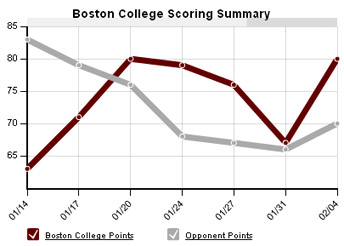 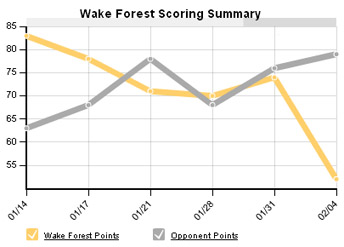 So this is just a mirror of the previous game, right?  Shouldn't Boston College win by 20?  Not so fast.

It has been said that history repeats itself, the question then becomes... which history?  The Wake/BC history or the Duke history?  Given Wake's size and talent, their home court advantage, the fact that they already beat BC by 20 once this season, and the fact that they are long overdue for an overtime game, I have to hope the Deacs will respond like the Blue Devils did.

Schedules and charts from Kenpom.com and Statsheet.com.