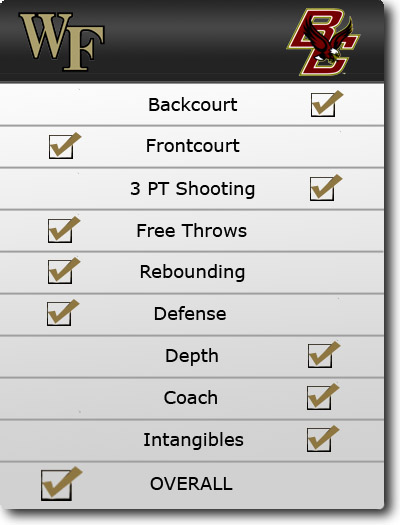 Backcourt: Jeff Teague/LD Williams vs Tyrese Rice/Rakim Sanders: Rice can flat out play and nearly always brings it against the Deacons, putting up 21, 32, and 20 in the past three years against Wake. This year he is averaging 18 points, 5.7 assists, and 3.8 rebounds per game. Teague didn't necessarily play bad against Miami but it's hard to say any of the Deacons had really good games. Teague put up 19, but only shot 6-14 from the field, and a miserable 0-5 from downtown.

After the two stars of their teams, it comes down to LD and Sanders. LD is uncertain for the game at this point after suffering a concussion on a hard screen that probably left him a little perturbed that his teammates didn't give him a heads up. Sanders is playing well this year, averaging 12.5 per game and coming off a 20 point game against Virginia, going 8-13 from the field. Overall, this category goes to BC because Sanders is a solid player and LD's status and playing effectiveness are in doubt.

Frontcourt: James Johnson/Al-Farouq Aminu/Chas McFarland vs Corey Raji/Joe Trapani/Josh Southern: There aren't going to be many teams that can bring a comparable frontcourt to the Deacons, and Boston College is no exception. Trapani and Raji are both good players, but all Southern brings to the table is some size. Trapani can stretch the Deacon defense, shooting 36% from deep on the year, so the Wake front line will have to be aware to stay on him on the perimeter.

Wake Forest's big men are all talented with size. Chas was benched to start the last game, most likely as a signal from Gaudio to get his emotions in check, but I expect him to return to the starting role because his inside scoring is sorely needed on the floor. Aminu and Johnson both struggled against Miami. Aminu only put up 4 points, while Johnson had 11 on 4-12 shooting. They need to take better shots and be able to finish around the rim to help Wake get back to winning. Wake takes down this category even though there have been some emotional issues coupled with a little poor play.

3 PT Shooting: Boston College takes this category primarily because they have more options from 3. Teague is still 50% on the year even after his 0-5 against Miami. But outside of him, Wake is lacking anyone that can make the opposing defense pay for packing it in. Harvey Hale is also coming off an 0-5 against Miami and hasn't been the reliable three point shooter Wake was hoping for. Boston College isn't a great three point shooting team either, but Rice and Trapani both have good range. Both of them are shooting a little over 36% on the year.

Free Throws: This is another close category that Wake takes down. Boston College is shooting slightly over 72% as a team, while Wake shoots a little under 70%. But percentages aren't the only factor. Wake gets to the line an average of 5 more times per game. So the slim difference in their shooting percent are overlooked by the tendency for Wake to get there more often. Additionally, besides Rice and Trapani the Eagles have no one shooting better than 70%. This means try not to send Rice in particular to the line and Wake should win the free throw battle.

Rebounding: Wake primarily gets this because of their size and the fact that they out-rebounded BC last game by 11. Boston College is 272 in the nation at defensive offensive rebounding % according to KenPom, meaning they give up a good amount of offensive boards. Wake has had their struggles recently with rebounding, but they still come into the game 68th in the country in the same category. Boston College does do a good job going for offensive rebounds, so Wake will have to make sure they use their size to box out and keep position.

Defense: This is where Wake holds a big edge. On the year Wake is still 5th in the nation in defensive efficiency while the Eagles come in at 117th. In some of the losses Wake has really lost focus on the defensive end, and that is where their fast paced offense has to start. Expect Dino to stress this after the Miami game where the Hurricanes shot 49% from the floor and 45% from three. Wake has to get back to the stifling defense that got them wins earlier in the season, but it has been shown that when they bring the effort they are one of the top defensive teams in the country.

Depth: Coming off the bench, Boston College has talented freshman Reggie Jackson. The 6-3 guard is scoring 7.6 per game and pulling down 3.5 rebounds. Wake Forest's bench has been struggling and that is hurting this team's chances to win games. Clark and Hale have not shown any consistency on the court and they are getting inconsistent minutes as a result. With the injury to LD the bench might have to play a bigger role but they haven't proven they can do that. BC's bench is playing 32.2% of their total minutes while Wake's plays 29.9%. For these reasons Boston College takes the battle of the benches.

Coach: Al Skinner has got BC playing well, winning five straight coming into this game. The Eagles were picked to finish 11th in the ACC for the Preseason Media Poll. They are coming into the game 6-3 good for 4th place in the conference. Dino Gaudio did a great job getting wins over North Carolina, Duke, Clemson, and BYU but has struggled getting his team up for the other ACC games, with losses to VT, GT, and most recently a drubbing at the hands of Miami. Until Dino shows that Wake can come out fired up when they don't have the traditional "big games," it will be hard to give Wake the coaching matchup.

Intangibles: As pointed out in the coaches match-ups, BC is coming in with all the momentum. Wake Forest is coming in off of 2 straight losses and 3 of their last 4. The scenarios are strikingly familiar to the last time Wake played at Boston College, with the roles reversed. Check out Brian Burke's article to find out more about these trends.

Overall: You may have noticed that BC took the majority of the first nine categories but Wake is still taking the overall better team category. While taking the depth category, the benches don't play a major role for either team. Defensively, Wake holds a much greater edge helping them take the overall category. A major reason Boston College is 117th in the nation in defensive efficiency is because they are 10th in the nation for 3 point defense. Wake doesn't utilize the three pointer all that much, and will be looking to go inside and inherently avoid BC's defensive strength. Judging as a whole team, I see Wake as the more talented team in this match-up. But with the momentum and the coaching edge, I personally see this being a very close game, that the home court could help Wake pull out. at the very end.

Feel free to voice your disagreement I like hearing other thought processes, and you may not agree with a team taking the overall when they don't win the majority of the categories. Let me hear your opinions.