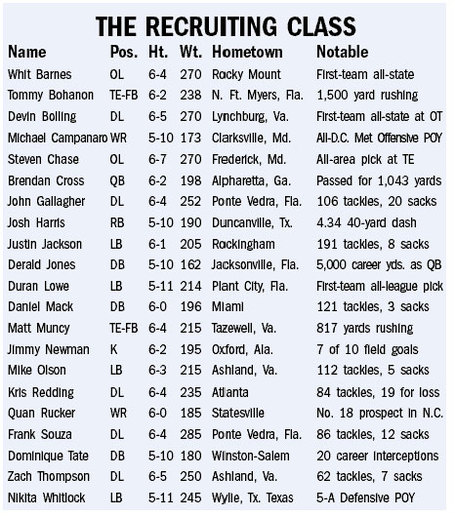 Notes and quotes after the jump...

This class just might be the best class Jim Grobe has ever brought into Wake Forest and that is not an overly hyperbolic statement.

Top to bottom it is easy to see that with success, the talent Grobe and his staff are recruiting have improved as the Deacs have started making bowl games and winning them. This effect means that recruits are not only "Wake-bound." As Grobe indicated, every player now is not just a diamond in the rough, rather they all have another offer--usually from at least one other ACC school.

The Deacs have become such good talent evaluators that Grobe joked about how he has to be careful about offering too early:

We have to slow our offer down. If we offer, other offers are going to start to come in. [...] In football, when a kid commits, that starts the recruiting process

The key is that Grobe sticks to his system of developing players--guys who will redshirt, who have potential--and he is willing to take a guy who is a little smaller, a little slower, and a little shorter, as long as they have on-field intelligence, a great work ethic, and one heck of a motor.

This year's class has a few standouts that Demon Deacon fans should keep an eye on:

Steven Chase grey-shirted last year, which has allowed him to come in during the spring up almost 50 pounds from last year. Grobe isn't sure where he's going to play, but he is practicing this spring and Grobe has shown that he shows preference to players who get that extra semester of practice time. (See Joe Looney from last season).

Frank Souza was the gem of the Deacon class. He is tough, strong and physical and one of the better DL prospects in the 2009 class. John Gallagher, his partner at Nease High School (which is quickly becoming Wake Forest South), isn't too shabby himself.

Devin Bolling is a beast. He has a terrific frame and he just tears through people. Again, he's a guy that could play on either side of the ball, but he should play on the DL. He's too strong not to. He was all-state at OT and had 25 pancakes last season.

Michael Campanaro is just one of those guys who could take it to the house every time he touches the football. He had over 2,000 yards in receiving and rushing yards and had nine interceptions on defense. He had 38 touchdowns last year. And he's one heck of a punt/kick returner.

Josh Harris missed most of the season with an ACL injury, but he has game-breaking speed, running a 4.34 40. He's another playmaker and it's not entirely sure if he's going to play RB or a slot receiver, but wherever he plays he will be a playmaker.

Duran Lowe could be the next Chip Vaughn. He is a hard-nosed safety who absolutely crushes people. Another of the Deacs' players who was hampered by injuries, just like a lot of those other guys a year of conditioning and strength without losing a year of eligibility should really help him.

Nikita Whitlock is going to be a guy Wake Forest fans will love to watch. One of the latest signees, Whitlock did not pick up a lot of attention because he is 5-11 and was on the defensive line. Still, he won 5A defensive player of the year in TEXAS. This kid can flat out play. He had 165 tackles his senior season and 15 sacks. Playing at LB will use his speed and strength--he benches over 400 lbs. Grobe had this to say about the kid:

We see Nikita as a mike LB--an Arnoux-type. Because of his height--he's not very tall--but on film he's as good a player as anybody. We think we got a steal there.

Jimmy Newman is coming in as a kicker/punter and the kid has a leg. He had 37 touchbacks--in high school!  He also averaged 38 yards per punt and was 7 of 10 for a long of 47 yards with 30 of 31 PATs. Keep in mind, kickers in high school have a really rough go of it because teams don't know how to use kickers at all. It is not a dynamic part of the high school game. Grobe and his staff know what they're doing with the kicking unit and Newman should be a big part of the Demon Deacons in the future.

This class is well-rounded with very good talent--with 10 three-star recruits according to Scout, the most they've ever had. The only thing I would have liked to see were more OL, but Grobe has said that this will be a point of emphasis next season.

Grobe got the guys he wanted. He doesn't go for the guys playing the recruiting game for attention, lining up 30 offers and making teams wait till the last minute. Grobe said:

The kids that will be freshmen at Wake Forest in the fall of '09 are Grobe's guys, and if they play as well as Grobe is hoping they'll play, they could have the chance to be a better class than this year's senior class--with Aaron Curry, Alphonso Smith, Stanley Arnoux, Chip Vaughn, Kevin Patterson and Sam Swank. Signing Day sure gets me excited for football, and I don't know if I've been excited about any class more than this one.