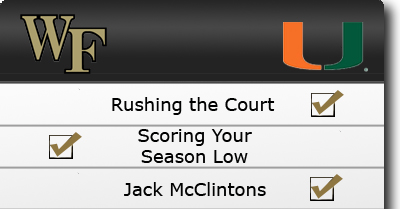 Rushing the Court: Well I think Miami has to take this category down. It certainly helps that they happened to be playing at home but I think the key to the Hurricane's edge is winning by 27.

Scoring Your Season Low: Well Wake gets to take one of the updated matchups this game so don't be sad Deacon fans. Wake set a season best for their lowest point total.

Jack McClintons: Miami holds a slight advantage over Wake Forest here, coming into the game averaging 1 more per contest. This category proved huge tonight, for if the Deacons held the edge they very well might have taken the game. However they did not and Miami benefited with an additional 32 points off of McClintons.

But moving on to a more serious note...

There is a lot Wake has to improve upon from this game. Miami came out fired up and played an incredibly well balanced game, good defense coupled with some knockdown shooting, so all the credit in the world to the Hurricanes. But Wake did not look like a team that could have kept games with Duke and UNC within 40.

Let's try to break down the problems one at a time. Wake completely got away from what won them the big games earlier this year. This includes settling for way too many three pointers. This is not a team that can live on the long ball. Wake ended the night 3-20 from distance, a miserable 15%. Hale and Teague combined to go 0-10. When you aren't hitting them, stop taking them. It's a pretty simple solution. Wake is a team that needs to use their size to get the ball down low. They have to wear their opponent out while picking up fouls and lay-ups. They showed zero ability to do that tonight, one of those reasons being...

The inability to break down the zone. Wake needs to pass better, and at least make one or two open threes, to get the teams from packing in the zone. Hale and Clark when given the opportunity need to keep the defenses honest. The Deacons need to spend more time working the ball into the zone, driving or passing, and then move then ball when they get collapsed upon. Miami did a great job of forcing Wake Forest into situations where they were uncomfortable and came away with a statement victory because of it.

Some of this has to fall on the coaching staff. The team has not been ready to play these past couple games and are losing the games that they have to win to make a serious run at the ACC title. The game was close going into the break, Wake down 3 at the half. This is where the coaches have to make their adjustments and get their team ready to explode in the second half. As evidenced by the final score Wake did not come out ready to play in the second half. Close your eyes or leave the page now if you are squeamish. ESPN Game Flow: 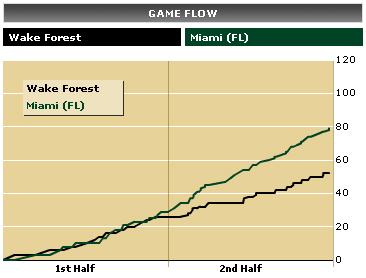 This is an atrocious graphic. Wake didn't show any offensive flow to start the game and any semblance of a basketball team was gone at the beginning of the second half.

Wake Forest has a lot to work on going forward this season, and they have to be aware that they need to bring maximum effort on every night in the ACC. This conference is too good to rest on your laurels. Dino and his staff should have a serious sit down with the team, and if they don't I hope there is a good locker room presence who will take this upon himself, to reestablish the goals that were laid out at the beginning of the season.

This game was a statement game for Miami, now it is time for Wake to make some statements. The Deacons will have to play team basketball and show that they can beat the teams that they are supposed to beat. The ten minute ride home from game-watching was long enough for me, I can't imagine the trip in store for the players. But after all this team has been through these past couple years, I have little doubt that this team will show it's character and come out mentally prepared from here on out.