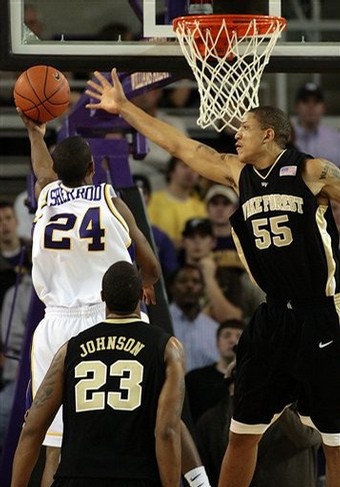 For a team that puts so much emphasis on rebounding, there is a trend that has definitely been bad to the Deacs the last few games.

Teams are racking up way too many offensive boards. Keep in mind, Wake Forest is a shot-blocking team and their length on defense causes teams to shoot a low percentage. With that low percentage, there are going to be more long rebounds (especially for teams that shoot a lot of three-point shots).

That notwithstanding, there is no excuse for not boxing out on defense, something I've heard Dino talk about time and again. So what is the problem here?

more after the jump...

One obvious thing stands out: if a team shoots a higher percentage, they tend to get less offensive rebounds. This is a very loaded statement though. Again, I can't stress enough how important the relationship between long shots and long rebounds and offensive rebounds are.

More often than not, the Deacs will get a hand in the shooter's face and they will do a decent job of boxing out, but one guy will slip in because the shot is so bad that the rebound careems away from the hoop and the Deacon big men.

So, when you look and see that the teams with poor shooting percentages, especially from beyond the arc, have high offensive rebounding totals--this makes a little bit of sense. But how do you account for the rest of the rebounds (especially when the Deacs are so big and so long--and should be out-rebounding opponents every game)?

A lot of this has to do with the all-or-nothing mentality of the Wake Forest defenders. When a guy goes into the lane, he is usually met with two or three Wake big men--James, Farouq, Chas, Weaver, etc... will shift down. The problem in this though is that while one guy should be boxing out and keeping his feet set, they all seem to go for the block. This leaves people out of position and lets the opponents grab offensive rebounds (and oftentimes, easy buckets).

The Deacs need to do a better job of picking their spots with blocks and staying in position to avoid allowing teams to pick up garbage points underneath the hoop. This is demoralizing for a team that plays such hard defense to see them alter and even block a shot and have the possession be blown up by a guy collecting an offensive rebounds and putting back an uncontested layup.

I'm ok with teams getting some offensive rebounds--those long boards--because the team played such good defense that the shot wasn't even close. It's the inexcusable rebounds around the hoop because our guys are too aggressive and out of position that are really hurting the team in general and have allowed opponents in the last six games to average just over five more shots per game than the Deacs.