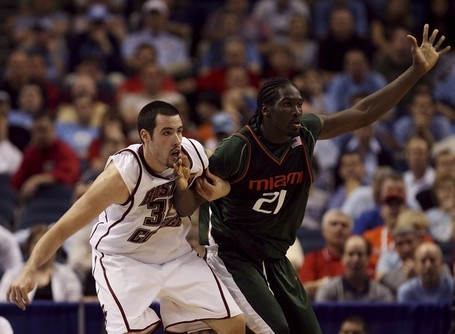 WakeJake did a great feature spotlighting Lawal last week, and I think this is something we should do game-by-game. This week, I was tempted to talk about Jack McClinton, as he always goes off against Wake, but you all know McClinton. The player that will mean more to them against the Deacs will be Junior forward Dwayne Collins.

I've always enjoyed Collins' game. He's a bruiser and a tenacious rebounder. This year he averages 12.2 points and 7.6 rebounds per game with over 3 offensive rebounds. He also tosses in a steal and 1.5 assists per game.

His downfall has always been FTs. He is just a 54% shooter on his career from the stripe and leads the team in attempts. Getting to the line: important. Making your free throws when you get there: much more important--especially against a team like the Demon Deacons who are always looking for the block and the chance to deny easy looks.

Collins did not play a whole lot (and wasn't effective) in both games against Maryland . He wasnt in foul trouble. This was more a result of trying to fit a smaller lineup against the Terps guards. I do not see this happening again. Since the Deacs play big, I see Collins having a big night.

Something of note though: Collins has been known to take games off. There's always been a question of motivation and although this year he seems to have addressed that this year, he has had seven games of 8 points or less.

The key to containing Collins will be a mixture of good subbing by Dino--using Woods and Weaver effectively--as well as needing McFarland to bring his A game, something he has not done recently. If Chas can stay out of foul trouble, he matches up well with Collins. At 6' 8", any number of Deacs can play on him. The 'Canes' biggest player comes in at 6' 9", so just what team Coach Frank Haith wants to put on the floor is a big question. Collins has not fouled out of a game all season--and a lot of the games he plays best in are when he has at least 25 minutes.

Despite all this, look for Collins to be right around 18 points and 12 rebounds if Haith plays a big lineup. The Deacs have been allowing teams to get plenty of offensive rebounds recently and Collins seems to be a magnet to the offensive glass, which should give him plenty of opportunities to clean up the trash for a team that takes a whole lot of jump shots.