Share All sharing options for: Wake Forest vs Miami Matchups 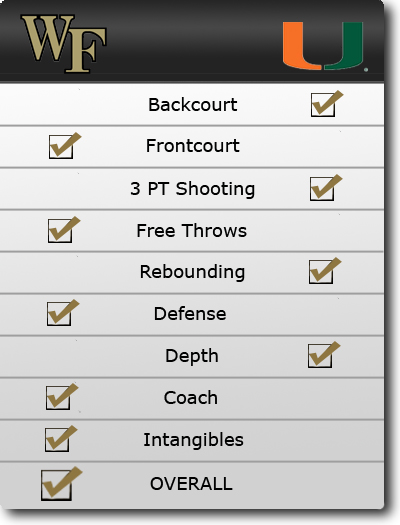 Category breakdowns after the jump...

Backcourt: Jeff Teague/LD Williams vs. Lance Hurdle/Jack McClinton/James Dews: McClinton is the primary reason that Miami takes this section. McClinton may have the most range of any shooter in the ACC--connecting on 44.5% of his threes, with many of those practically two feet from the half court line. LD is a very good defender but rarely packs any real offensive punch, struggling on the year shooting 22% from three. Jeff Teague seems to be slowing down a bit after putting up player of the year numbers early in 2009. Teague played the fewest minutes against Georgia Tech since the Radford game at the end of December. Hurdle and Dews aren't necessarily great passers, but they don't turn the ball over much either. Without Teague playing at his best, actually his 85% would be still really good, the Wake Forest backcourt lags a bit behind the Hurricanes'.

Frontcourt: James Johnson/Al-Farouq Aminu/Chas McFarland vs. Brian Asbury/Dwayne Collins: This is the strength of the Deacons starting lineup, with plenty of size in the frontcourt. Dwayne Collins is an underrated player in the ACC having a lot of spotlight taken away by McClinton. He is averaging 12.2 points per game on 62% shooting, but struggles mightily at the free throw line, only hitting 58% of his attempts. Oddly he is leading the team in steals and is third in assists, while being their largest starter. Asbury averages 7.1 points and 4.9 boards, only 39% from the field, not a great percentage for their starting power forward. On the whole, Wake Forest takes the front line because of the skill that all three of their starters bring inside.

3PT Shooting: Wake Forest is last in the nation at percentage of their points that come from three pointers at under 15% of their total points. Teague is the primary reason that Wake even gets to that percentage. Teague is hitting an unreal 54% of his three pointers while still attempting three per game. But Miami still possesses McClinton, whose range extends out of the gym. He is attempting 6.5 per game and as noted is hitting 44.5% of those. Teague is still a little mechanical while McClinton has a much smoother shot. This category really came down to those two players and it is hard to take anyone over McClinton when it comes to three pointers.

Free Throws: Basically Miami doesn't get to the free throw line as often as Wake Forest and they end up shooting a lower percentage. Collins leads Miami in free throw attempts by a large margin and only shots 58% from the line. Teague is Wake Forest's leading free throw shooter at 81% and he has taken 49 more free throws than the next closest player on the Deacons. Recently though, Teague has not been getting to the line nearly as much.

Rebounding: This category goes to Miami because they are 9th in the country in offensive rebounding percentage according to KenPom. Recently Wake Forest has been struggling on the defensive boards, even though they typically have the size advantage. Miami should be able to once again exploit the offensive glass to get second chance opportunities and frustrate the Demon Deacons.

Defense: The Hurricanes are a respectable 84th in the country in adjusted defensive efficiency, but Wake Forest hangs their hats on solid defense. Wake Forest is 5th in the nation in the same category. The Deacons will try to pressure Miami and keep a man close to McClinton at all times. Expect LD Williams to be on the floor stuck to McClinton's jersey. That will be an interesting matchup to follow in this game.

Depth: Wake Forest has been limiting the roles of their bench players recently, reducing their overall impact on the game. Miami is 27th in the country in percentage of bench minutes played. Jimmy Graham brings some size off the bench while DeQuan Jones could possibly show us another dunk of the year candidate (see Miami v UNC).

Coach: Frank Haith has done a good job getting quality talent for basketball but so far this year his team has underachieved, starting the season ranked and dropping seven games this season. While Wake Forest has lost a couple games they shouldn't have, they have won some huge matchups and Dino is garnering serious National Coach of the Year attention.

Intangibles: In a near push we give a very slight nod to Wake Forest. Miami is coming off three straight losses, of which two were in overtime and they can't be feeling very happy about the way the season has gone. Wake responded to their first loss well, beating then #1 Duke. Now they will have to respond to a loss to the last place team in the conference against a team also searching to get back on track. Miami does have the home crowd behind them though, which should make some difference.

Overall: This game is going to be a very tough road battle for the Demon Deacons. If McClinton is hitting his shots this could be a long day for Wake. As it is, Wake is still the more complete team from top to bottom and if they play up to their potential should be able to pull out the victory at Miami. However, it would not be surprising in the least for Wake to drop its second in a row on the road, as Miami has the talent to compete with anyone on any given night. They will have to shake off the slump they have been in these past few games, but as we know an overtime game could be a completely different game with just one better possession in the first half. It should be an entertaing game with both teams having the opportunity take get another ACC win.