Deacs bite back against Pack

Share All sharing options for: Deacs bite back against Pack 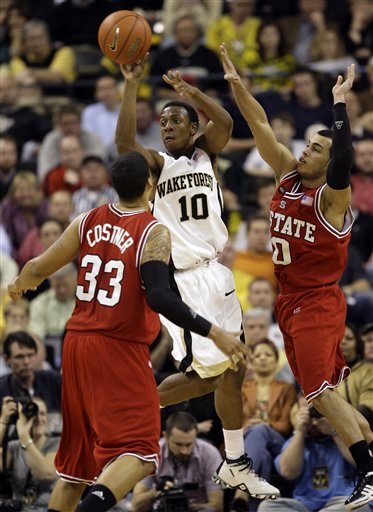 If you had told me that Jeff Teague would go 3-12 from the floor and Al-Farouq Aminu would finish with three points on 0-6 shooting against NC State, I would be more than ready to hear that the Deacs continued their woes against the Wolfpack.

Luckily for Head Coach Dino Gaudio and the Wake Forest fans, Ish Smith and James Johnson weren't about to let that happen and Wake Forest won 85-78...

The Deacs absorbed a number of NC State runs, in both the first and second halves, and deflected them using a combination of good defensive rebounding and a relentless attack in the paint.

The tone was set early as Chas McFarland scored the Deacs first five points and added a steal and rebounds (He finished with 15 points and eight rebounds on the night). McFarland did a much better job of staying on the floor tonight and kept himself in a better position to receive the pass on offense and play solid help defense.

James Johnson took to heart the fact that he played an uninspired game in Raleigh earlier in the month. He gave up 10 offensive rebounds to Tracy Smith at the RBC Center, but made it his mission to attack relentlessly on both sides of the floor, finishing with 28 points and 18 rebounds--15 of which were defensive. Smith on the other hand had just four rebounds, one offensive.

Jeff Teague's body language suggested that he was out of sync all night. His shot wasn't falling and he was clearly frustrated. McFarland and Johnson picked up the slack, but Ish Smith gave the Deacs the killer instinct they needed to pull out the victory.

Smith hit a pair of threes, both at critical junctures in the game, and threw up a dagger alley-oop to Johnson late in the game. He played his best offensive game of the year, snaking in the lane and hitting pull-ups and drives. He had 18 points on 6-8 shooting, hitting 4-4 free throws and pulling his FT percentage to 80 on the year.

NC State was paced by Smith, who contributed on the offensive end with 18 points, and Ben McCauley who had 12 on 6-9 shooting. Farnold Degand continued to be a Wake Forest killer, finishing with 12 points and five assists. Both Brandon Costner and Courtney Fells were off their game, combining for 7-20 shooting and 18 points.

The Deacs desperately needed this victory as they have a quick turnaround at Virginia on Saturday. Wake Forest started the year as a great road team--winning games on neutral floors--the Anaheim Classic--as well as at ECU, BYU, Clemson and BC. Lately though, with losses on the road to Georgia Tech, Miami, NC State and Duke, the Deacs need to shake the rust off.

The win pulls the Deacs in a tie for third place in the ACC, and the key now is just to keep themselves in that top four so that they don't have to play on Thursday in the ACC Tournament. They have three games remaining--at Virginia, at Maryland on Tuesday and against Clemson on Saturday.

This is not the easiest stretch in the world, but if Wake can pull out two of their next three, with the schedules of the other teams at the top (outside of Carolina), they should be assured of a top four spot.

The Deacs have a chance to buckle down and reestablish themselves as a premier team in the league and in the country. Tonight's game was a step--with Teague and Aminu struggling it is big to see other people step up.  With the weapons that this team has, if they can finish the season on the same page, Wake will have a solid shot to make it to Sunday in the ACC Tourney and has the potential to go very far the rest of March.