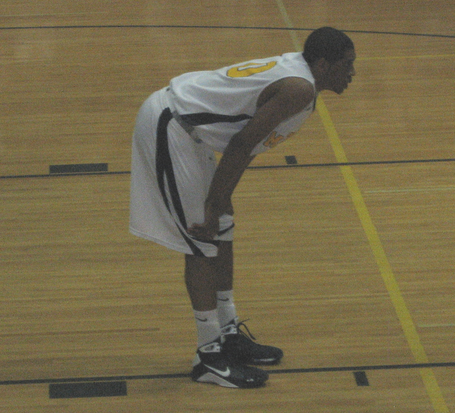 Wednesday night the Blogger So Dear staff had the opportunity to check out Wake Forest signee CJ Harris as his Mt. Tabor Spartans took on Charlotte Vance in the NC 4A state playoffs.  Harris and backcourt mate Josh Hicks provided plenty of offense and shut down Vance rising star Marquis Rankin as Tabor won comfortably and advanced to the next round.

The scoop on CJ Harris:

This was only my second time seeing Harris in person and I came away impressed again.   CJ is not the type of player that will drop 40 points and hit eight threes like 2010 Wake verbal JT Terrell.  However, there are many positive aspects in his game that Deacon fans will enjoy over the next four years.

The first quality that the staff and I noticed about CJ's game was his defense.  Standing at 6'2", Harris was able to cause major problems for Vance as he repeatedly got in the passing lanes, racking up at least five steals that led to easy baskets.  He possesses extremely long arms, which is a huge asset that helps him deflect passes and grab rebounds. Super sophomore Marquis Rankin (who has high mutual interest in Wake) was limited by Harris and Tabor's other two star guards, although he did have a couple nice drives to the basket late.

On the offensive side, Harris' biggest asset seems to be his basketball IQ.  He controls the pace of the game and usually makes the right play instead of making the spectacular play.  Wednesday night Harris ended with 24 points, with 10 coming in the third quarter.  Early on, he failed to convert on a few drives but picked it up after the first quarter as he continued to get to the rack at will, finishing with both hands.  As a matter of fact, all of his points came from either dunks, tough layups in traffic, floaters or free throws.  While the experts say that he has really improved his shooting over the past year, we did not have to opportunity to confirm this as he did not attempt a shot from behind the arc.  This was likely a smart move, as Vance could not keep him out of the paint anyway.  From my standpoint, the most surprising aspect of tonight's game was seeing CJ slam it home twice, once on a fast break and once with both hands in a half court situation.  While he is not LD Williams, he does possess enough athleticism to get by comfortably in the ACC.

Now onto the areas of improvement.  First, I will give Harris a pass on this one because it seems that this game was an outlier, but his free throw shooting tonight was sub-par.  We had him at four of ten on the night.  Also, a couple years on Wake's conditioning and strength program will do wonders for CJ.  While he has great length, he is also wiry and will need to add strength to help him finish shots in the paint against ACC big men.

Overall, MRickman, RPhilpott, Griff and I came away impressed tonight.  By all accounts CJ is a great player, student and will be a wonderful asset to the Wake Forest community.  It was nice to see current Wake players James Johnson, Ish Smith, Jeff Teague, Gary Clark, LD Williams and Harvey Hale supporting their future teammate tonight as well as coaches Gaudio, Battle and Corbean catching the action.  Look for CJ to contribute at both guard spots, as his ball-handling, IQ, slashing ability and defense will be beneficial for the Deacs over the next four seasons.  If you are in the Winston-Salem area and want to catch CJ in action, Tabor's next playoff game is Friday night at home against Greensboro Page.

Here are a couple more low quality shots from the game: CJ Harris on the drive. A welcome sight for Deacon fans:  CJ boxing out!