Startling Statistic: Getting to the foul line

Share All sharing options for: Startling Statistic: Getting to the foul line 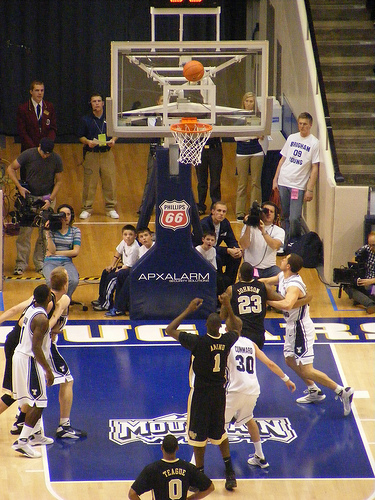 It's no secret that a big part of Wake Forest's offense is driving the lane hard which often results in getting to the line.

But I think it needs to be noted just how tied free throw shooting is to the Deacs' chances of winning or losing...

In the games that Wake Forest has taken more FTs than their opponents, they are 19-0.

In the games that opponents have taken more FTs than the Deacs, Wake Forest is 0-5.

One thing immediately stands out--the Miami game. The FT differential was only -4, but the Deacs lost by 27. That was based a lot around the fact that the Hurricanes hit 11 of their 24 three pointers, while the Deacs shot 3 for 20 from beyond the arc and 31.7 percent on the game. So, despite losing the FT battle, the zone and hot shooting of Miami and Jack McClinton explained that loss.

But the other four losses stand out starkly. In each of these games, the FT differential was more than the margin of defeat and in three of the games, the FT disparity was double the margin--so if the Deacs had shot the same number of free throws as their opponent and hit just half of those, they would have tied or won the games.

Winning the free throw battle is extremely important for a number of reasons. First off, getting to the line means that the Deacs are working to their strengths and effectively using their gameplan. When they get to the line, it means they are fighting down low and players like Johnson, Aminu, McFarland, Woods and Weaver are spending a lot of time in the paint. This also means that guys like L.D. Williams, Ish Smith and Jeff Teague are driving the lane rather than shooting around the perimeter.

This also brings up the more obvious point of foul trouble. When they are putting pressure on the other team and putting them in foul trouble, the Deacs get to see more second lineups, which allows Wake Forest to utilize their superior athleticism.

On the defensive side though, when the Deacs are in foul trouble themselves, the Deacs have to use smaller lineups, which creates spacing around the perimeter, but the team does not cut enough to get easy looks.

When the other team shoots free throws, not only does this negate the Deacs defensively, meaning that teams come away with fewer empty possessions, but it slows the tempo down, something Wake Forest hopes desperately to avoid. With free throws, unless there is a miss on the second foul shot, the Demon Deacons have to inbound the ball, which allows their opponent to get set in their defense and forces Wake to run their half-court set, which is a lot less effective than when they get out and run.

All of these factors seem to show just how important free throw shooting is to the success of the Demon Deacons. Head Coach Dino Gaudio has mentioned this in post-game press conferences a number of times, but there is a difference between merely recognizing it and making the change.

The team has to reach less around the perimeter (especially on those three-point shots) and keep their body set and their arms up straight. The team played great defense earlier in the season and there is no reason that this team can't amp it up for the remaining few games before Atlanta.