Share All sharing options for: Wake Forest vs Duke Matchups 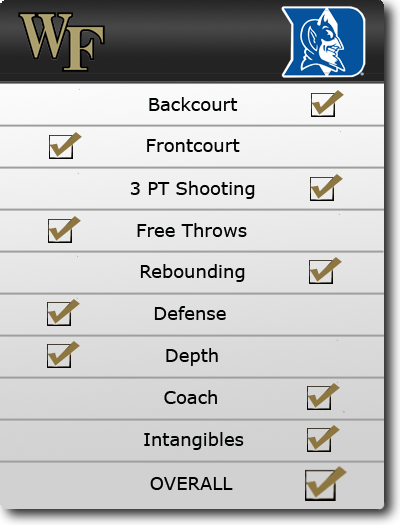 Backcourt: Jeff Teague/LD Williams vs Elliot Williams/Jon Scheyer/Gerald Henderson: It is hard to classify Henderson as a forward because he is 6-4, 215 pounds and due to the way he plays (a spectacular pull up mid-range game). So rather than force him to fit in the front-court category, we put him in the back-court and we will give the edge to Duke. Duke has been struggling recently with their point guard play and just inserted freshman Elliot Williams into the starting rotation last game. He performed reasonably well, shooting five of six from the floor; the only problem is that he had zero assists and three turnovers. These aren't the numbers you want from your point guard in terms of passing.

Scheyer is the Blue Devils' third leading scorer at 13.3 points per game. However, he is only shooting 38 percent from the floor. Scheyer redeems himself at the free throw line shooting 83.8 percent as well as shooting 35.5 percent from long range. Compare those two against Wake's Teague and Williams and this category probably is a slight lean for Wake, but throw Henderson in the mix and it has to go to Duke. Henderson comes in averaging 15.6 on 48 percent shooting and 37 percent from three. Henderson is silky smooth on the midrange jumper as all the Wake Forest fans saw in the last 10 seconds of the game in Winston-Salem. He put up 20 points on nine of 17 shooting in their last meeting and Wake will certainly concentrate on slowing him down.

Teague is coming off a 15 point performance in 25 minutes of play against Georgia Tech. He got his touch back from deep too, hitting two of three outside the arc. LD had a solid game with six points and three boards with his usual high energy defense. Overall, Duke takes down this category with the impact that Gerald Henderson makes.

Frontcourt: James Johnson/Al-Farouq Aminu/Chas McFarland vs Kyle Singler/Lance Thomas: After putting Gerald Henderson in with the guards, the front-court has to go Wake Forest. Kyle Singler is another stud at Duke. Singler has a plethora of skills in his bag, and at 6-8 he still has the ability to consistently knock down the long ball. He is Duke's leading scorer, averaging 16.3 points per game while shooting 45 percent from the field and 36 percent from three. Not only does he score, Singler averages nearly eight rebounds per game, 2.7 assists per game, almost one block per game, and 1.7 steals per game. He is an all-around baller in the front-court.

Lance Thomas was another player who was recently inserted into the starting lineup over Brian Zoubek. Thomas has performed very well in the past couple games, combining for 21 points on 10 for 12 shooting. Even though Thomas has had a couple good games in a row, Wake Forest's frontline still stands above the Blue Devils'. James Johnson is coming off a superb 24 point, 11 rebound effort at home against Georgia Tech. Aminu quietly had 14 and six against his brother's team.

Chas has been under-performing recently, having not surpassed his scoring average in the last seven games. The last time he scored more than eight points was at home against Duke where he put up nine points and seven rebounds. Wake Forest will look for another effort like that from McFarland this time around. Overall Wake Forest brings more size and talent to the frontline than the two Duke starters.

3 PT Shooting: Going into the match ups I thought this would be a lot more clear cut than it is. As a team, Wake Forest shoots 33 percent from deep while Duke only shoots a slightly better percentage at 33.5. What the category comes down to is that Duke relies on three pointers more than Wake Forest does. The three point shot makes up 25.9 percent of Duke's total points, it only makes up 15.1 percent of Wake's total points (the second lowest percentage in the country).

On the year, Duke has played two more games but attempted 225 more three pointers (and they have a slower overall tempo than Wake). In the first meeting Duke only managed to shoot four of 22 from three, so it remains to be seen if that was an off night for Duke, good defense by Wake, or a combination of the two.

Free Throws: This one goes for a slight edge to Wake for a similar reason that three point shooting goes to Duke. Wake is just better at getting to the free throw line. Duke hits free throws at a slightly better clip, 72.1 percent, Wake hits at 70.8 percent. The difference maker is that Wake is 17th in the nation in free throws attempted per field goal attempted. Duke is 96th in the same category, so despite the small difference in percentage, Wake is able to get to the line more often.

Defense: Duke is definitely one of the top defensive teams in the country. In fact, KenPom has them one spot higher than Wake in defensive efficiency (7th against 8th). However, we give this nod to Wake because of how the teams have been playing recently. Duke has been struggling to hold their opponents to poor shooting percentages. Their past three opponents have shot 54, 58.8, and 54.8 percent from the floor.

Wake Forest has turned it around a little bit and shown renewed intensity on the defensive end. One issue to keep an eye on is that Wake will be on the road where they have struggled defensively. Duke thrives on creating turnovers, as they are 21st in the nation in steal percentage. This is another area to keep an eye on. This category goes to Wake right now, but there has to be an asterisk due to location. We will find out if Wake can continue the momentum and play good defense on the road.

Depth: This category goes to Wake despite the fact that Duke uses their bench a lot more. On the season Duke is 112th in percentage of bench minutes played, compared to 202nd for Wake. Even though Duke's bench plays more Wake's bench seems to have a bigger impact. In the past five games Wake's reserves are averaging 18.4 points per game, compared to 7.4 for Duke in the same span.

Coach: We didn't discuss this category for very long. Mike Krzyzewski has more Olympic Gold Medals than Dino has ACC Tournament wins. Coach K's success is what Dino should be striving to come close to in his career. Hey, they both coached for Army, perhaps Gaudio could pick up another couple similarities along the way.

Intangibles: Duke has the ever-important home court advantage. Considering this game is at Cameron Indoor Stadium, we know Duke will have a loud crowd to support them. In addition to that, Wake has struggled on the road recently which also hurts them in the category. This is an important game for both teams since they are currently tied at 7-4, so you know Duke will be rearing to pump the crowd up early.

Overall: After taking into account all these factors Duke takes the edge over Wake Forest in the second meeting of the teams. The last meeting was decided on the last shot of the game, and this game should be very close as well with two nearly evenly matched teams. If Wake's bench shows up, which is difficult to predict on the road, Wake will have a very good chance to steal this one against one of their in-state rivals. There is still a tight race in the division for the byes in the ACC Tournament as well as potential match ups in Greensboro in March, so expect a very entertaining game come Sunday night.