Explanations after the jump. 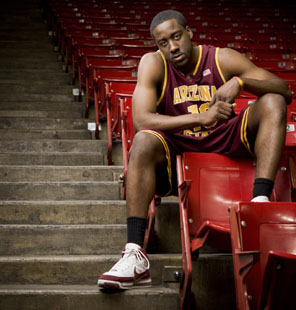 surprise to see him on here.  He also looks like he's about 33 years old, what I and everyone else calls Greg Oden syndrome.  What you might not know is that he isn't all hype and scoring.  Yes, 21.3 points a game is great, but he also drops 4.2 assists and 5.5 rebounds a game...somewhat the college equivalent of LeBron numbers.  Yes, I went out on that limb.  He also steals 1.7 balls a game.

More importantly, to be the lead scorer on his team but still rank in the top 200 in offensive rating is a pretty good quality; he comes in at 179.  He also has an Effective FG percentage of 58.9 and a True Shooting percentage of 63.6, 125 and 61 in the nation respectively.  Those numbers are great for a guy who shoots as much as he does.  An additional bonus, he's 8th in the nation in FT made and 3rd in FT attempted.  As a two-guard, that's great.

2) Jodie Meeks can score, and I love someone who can score.  The difference

between him and other SGs that can score is that he does it incredibly efficiently.  He's dropping 25.8 points a game, but also contributing 3.7 rebounds and 1.2 steals; modest numbers, but good in addition to 26 a game.

He is  92nd in the nation in offensive rating, 130 in effective FG percentage (58.5), and 40 in true shooting percentage (64.5).  He is also 5th in the country in FT made, but only 21st in FT attempted.  He shoots 47 percent from the field, 44 percent from behind the arc, and 90 percent from the stripe.  Kentucky should be better than they are with players like him and Patrick Patterson.  Also, look at his stat sheet and look at his conference rankings...a lot of ones there.

very well this year and deserves this mention.  15 points, 2.7 dimes, 4.8 boards, and 1.2 steals a game are good, but not spectacular numbers.  Where he makes up for this is in his efficiency.

He is incredibly efficient and comes in at 36th in the nation in offensive rating.  One thing that affects his numbers is that he doesn't really get the kind of minutes that the other guys on this list get.  He only logs 29 minutes a game, and the other guys log more than 30 a game.  Also, he is the only guy on this list who isn't the premier player on his team.  Ellington could even be considered UNC's third option.  That said, to be that efficient in such a weak crop, he deserves mention on here. 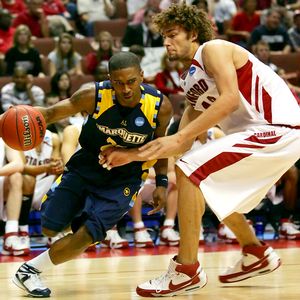 people, kinda.  The thing is that they are both SGs, and they are both really really good, and they are the same exact player.  Also, Marquette runs that crazy three guard offense that is almost a four guard deal with Hayward that I just had to do both of these guys.  I'll start with McNeal.  He contributes 20 points, four assists, 4.7 rebounds, and 2.2 steals a game.  The problem is that he's only 301 in offensive rating, which is poor...so I guess he's the opposite of Ellington.  He shoots 48 percent from the field and 43.8 percent from behind the arc.  He's just a great player on a good Big East team.  Now Wesley Matthews.

Those numbers don't jump off the page like McNeal's do, but his offensive rating is great, coming in at 79 in the nation.  He's also 35 in the country in true shooting percentage.  He shoots 53 percent from the field and 39 percent from behind the arc.  Which one is better?  I'd say Matthews, by a hair, but both are good enough to be on this list, so I cheated and put both on here.

5) James Anderson surprised me.  I wasn't expecting his numbers when I clicked

on his name, but there they were.  18 points, 1.4 assists, 5.7 rebounds, and 1.1 steals a game are solid.  He's 81 in the nation in offensive rating and 67 in the nation in true shooting percentage (63.4%).  He shoots 48% from the field and 41% from behind the arc.  He's a surprisingly effective player on a poor team, but after checking out his stats, imagine how poor Oklahoma State would be without Anderson.  Also, only being a sophomore, it will be interesting to see if he stays, and if he does, how good he can be.