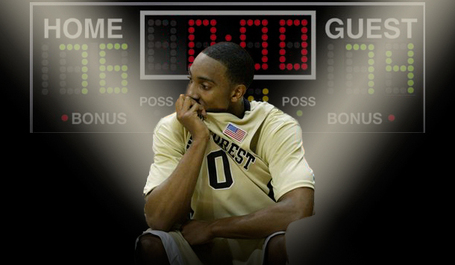 Wake Forest can still feel the sting of their 76-74 loss to Georgia Tech from a few weeks ago.

The Yellow Jackets are just trying to get their sting back...

This Wednesday, Wake Forest (19-4, 6-4 ACC) will get a chance to reach the 20-win mark for the first time since 2005, and avenge its last-second loss to Georgia Tech from just 17 days ago... and they'll get it on their home court.

And Georgia Tech is about as bad on the road as Wake is good at home.  The Yellow Jackets haven't won a road game since before Christmas, one of only two road wins all season.

Wake doesn't have everything going for them, however.

On Wednesday, the Deacons will try to start a two-game winning streak, something they haven't done in over a month.  And despite their six in-conference wins, the Deacs have yet to beat an ACC team with a losing record as they will play 1-10 Georgia Tech.  And GT's only in-conference win? Against Wake Forest.

Still, Georgia Tech is going to need to play well and take advantage of opportunities if they want to sweep the Demon Deacons on Wednesday.  For Wake Forest opponents recently, opportunities have come off the glass.

Rebounding has been one of the Yellow Jackets' strengths all year, both on the offensive and defensive ends of the floor.  They score a lot of their points off of second chance points, with Gani Lawal leading the way with 3.7 offensive rebounds per game.  Wake, on the other hand, likes to score off of turnovers, fast breaks and by pushing the tempo.

One way that neither team scores is from behind the arc: 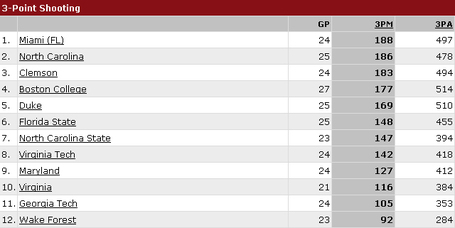 Wake and GT are at the bottom of the ACC in both three-pointers made and three-pointers attempted.  In fact, Wake ranks second to last in the nation in the percentage of their points that come from threes.

Both teams rank in the top 25 in the nation in tempo, but also rely on their defenses more than their offenses.

If revenge is a dish best served cold, then expect the Yellow Jackets to be freezing Wednesday night, as the Deacons know that the selection committee likes teams that are hot coming down the stretch.