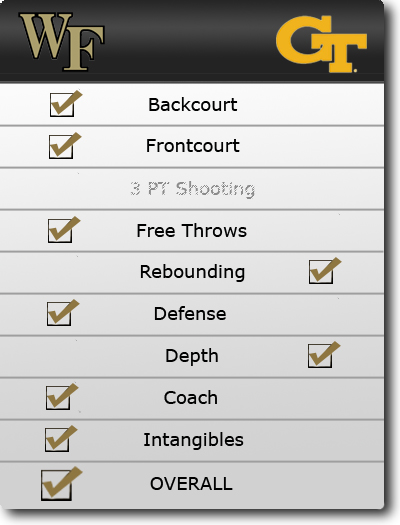 Backcourt: Jeff Teague/LD Williams vs Maurice Miller/Iman Shumpert/Lewis Clinch: Wake wins a tough category to judge considering Georgia Tech has been using a three guard lineup. Combined GT's 3 guards average 29 points combined, while LD and Teague also combine for exactly 29 ppg. Typically the Yellow Jacket guards struggle with turnovers. Miller with 2.9, Shumpert at 3.8, and Clinch at 2.4. Wake is a team that likes to get steals and run off of them. Both Teague and Williams shoot 50% or higher from the floor. On the other hand Georgia Tech's guards rundown is: Shumpert-40.1%; Clinch-31.6%; Miller-26.4%. Overall, Wake Forest sends out a better combination of guards while Georgia Tech sends out more.

Johnson is also coming off a game where he was stuck in foul trouble. After starting hot, James picked up a few fouls and ended up being stuck on the bench for the majority of the game. Aminu put up 17/5 last game and is averaging 13/8 on the year. Chas had a solid second half and could be putting his season back together after his averages have slipped to 8.9 points and 6.2 rebounds per game. On the whole, Wake has a better frontline, but Lawal is a player that Wake will have to do a better job of defending this game.

3 PT Shooting: The first push we have given out in our pre-game matchups. Both teams are not good at three-point shooting and don't particularly use it very much. GT is 12th in the conference in 3 pt percentage and 7th for 3 pt percentage defense. Wake is 9th in the conference for 3 pt % but 1st in 3 pt percent defense. In their three most recent ACC road games Georgia Tech has shot 4/18, 2/15, and 3/14 from deep. Basically, both teams are inept three-point shooters so we couldn't give either team the category.

Free Throws: Last game, Georgia Tech dominated Wake Forest at the free throw line, getting there 30 times and hitting on 23 of their chances. This is an anomaly for Georgia Tech as they average shooting 62.9 percent as a team from the free-throw line. Lawal who was 11-14 is usually a 55 percent free-throw shooter. Wake gets to the free-throw line more often than Georgia Tech in general and shoots more than eight percent better when they get there. For this reason, Wake takes down the category.

Defense: Wake Forest is coming off a great defensive game against Florida State, holding the Seminoles to 63 points on 38 percent shooting from the floor and a mere 18.2 percent from three. On the year, Wake is still 8th in the KenPom rankings for defensive efficiency. Georgia Tech is a very solid 34th in the same category. But unlike Wake, Georgia Tech is coming off an 86 point barrage from NC State on Georgia Tech's home court. Right now, Wake is a better defensive team, but don't count Georgia Tech out because they gave Wake trouble last game.

Depth: Ish Smith is coming off a good game for Wake Forest and seems to be improving. In addition, Tony Woods and David Weaver provide some good size off the bench. The problem for Woods is, if he doesn't get the ball and dunk it immediately, he usually gets called for a travel or a charge. Georgia Tech takes this category primarily because of their ability to bring Alade Aminu who is averaging nearly 12/8.5 on the year after starting much of the year. Storrs is a legit shooting threat off the bench as well shooting 38% from three on the year.

Coach: When it comes down to it, Paul Hewitt can recruit his butt off but isn't all that great of an in-game coach. Wake is playing at home where, just like the players, Dino looks a lot more comfortable. Dino made good adjustments at the half against Florida State which gave Wake a good victory over a ranked opponent.

Intangibles: There are a few main reasons Wake Forest gets this category. 1) Wake is coming off a big win while Georgia Tech is coming off a slew of losses. 2) Wake is at home where they have played much better this season. 3) This is a redemption game for Wake who lost on a last second shot by Georgia Tech last game. Georgia Tech will have a little bit of confidence knowing that they have already beaten them, but the majority of the intangibles swing to the Deacons.

Overall: Georgia Tech has already taken down Wake Forest this year which should be cause for concern for Deacon fans. But Georgia Tech is still 10-14 (1-10). This is a team that Wake Forest should handle at home with the motivation to atone for a loss that had to leave a sour taste in their mouth. Wake is the better team from top to bottom and as long as Dino can motivate them (which shouldn't be a problem), Wake Forest should be able to win this game without any real problem. But all Georgia Tech fans have to say is "That's why they play the games."