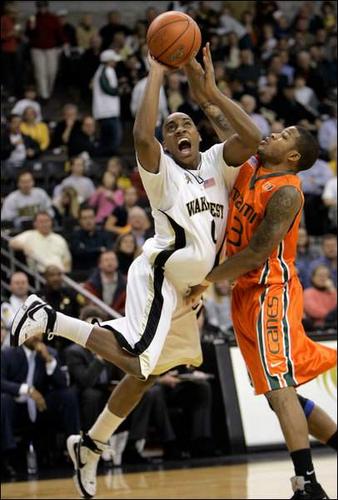 The Deacs have been surprisingly inconsistent since being ranked number one. In that Virginia Tech game, Jeff Teague scored 23 points on 10-16 shooting, and Wake's defense completely blew it that game, but since then, people have been grasping at reasons for the Demon Deacons' slide.

The easy answer lies in Teague's own statement that the team gets up for the big games and "takes" games off against teams they think should just roll over for them. There's more to this though; and it is really surprising how much Teague has dropped off since all the attention in January.

What's the reason? Let's start by looking at some of the numbers...

Averages in the games since Va. Tech (six games):

Wow, well if you look strictly at the numbers, it's easy to see that Teague's production is just down from his season numbers. What isn't even noted is what his numbers were BEFORE these six games, which have dropped his averages to their current rates. Is this a matter of Teague falling off, or merely was he playing completely out of this world before hand?

Well, it's a bit of both. Teague was not the primary focus of the defense until he shot up on the national radar. Now that teams have adjusted to Teague being the first scorer, they are throwing a ton of different defenses at him: zones, box and ones, triangle and twos, etc... which have neutralized him. Teague as of yet has not adjusted fully to this. He seems content with sitting back (especially in the State game) and letting his guy guard him, then trying to get teammates involved.

With Ish Smith on the floor, Teague far too often watches Ish and does not look to score. The two are good on the floor at once, but they could be better. In addition to this, it is incredibly hard to keep up the pace that Teague had. He was seeing a huge hoop and finishing a high percentage of his shots.

Since then, a couple things are contributing to his lack of production. As previously mentioned, teams keying in on Teague has hurt him in general. They're sticking to him and making it harder for him to get an open shot. He has had open looks though. And he isn't finishing his drives. That's what is hurting him even more.

He's still a premier player in the ACC, but as Teague goes, the Deacons go. This may just be a slump or a February wall, but for the Deacs to be more successful when Teague has off-nights, players like Aminu and Johnson need to get more involved--those two have the potential to dominate games. As does Chas McFarland, who has been virtually absent the last few games. If those three take over, that would make defenses pay for using garbage defenses on Teague.