Demon Deacons in the NFL

Share All sharing options for: Demon Deacons in the NFL 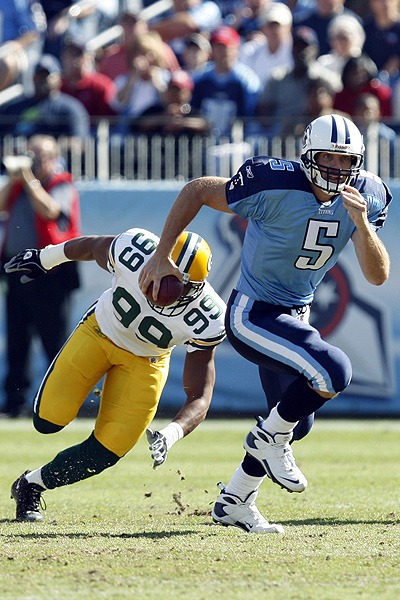 Taking a brief respite from the ongoing basketball season, I began thinking about the upcoming NFL Draft and how far Wake Forest football has come in these past few years. The Demon Deacons are sending a staggering 5 players to the NFL Combine which equals the ensemble sent by FSU, Miami, and VT combined.

Before we get into the current Wake Forest prospects (which we will definitely be covering in the upcoming weeks), Wake fans can take a look back at the most recent Deacs to enter the NFL. Last year's draft saw three Wake players get selected: Jeremy Thompson, Kenny Moore, and Steve Justice in successive rounds.

Let's have a quick look at how they are doing after their rookie season in the NFL...

Jeremy Thompson - Unfortunately for Jeremy he suffered from a groin injury in his rookie season. Prior to that he was able to get a few starts for the Packers due to other injuries along the defensive front. After missing a few games, he was unable to get the starting spot back, but still picked up playing time as the season wore on. Brandon from http://www.acmepackingcompany.com/ on SB Nation said that JT:

"was only playing on early downs and they would bring in a LB to pass rush on 3rd downs."

"He was drafted as a defensive end in a 4-3, but now the Packers are switching to a 3-4. He's listed at 270 lbs. which sounds too heavy for an outside linebacker, but too small as a 3-4 end... I expect they'll think about bulking him up, or slimming him down for LB, but nothing has been said yet. In four drafts run by GM Ted Thompson, he's traded down a bunch of times, but the only player he's ever traded up for is JT, so I don't expect they'll give up on him easily."

I can't wait to see how he adjusts next year and who knows, maybe he'll make a transition from college lineman to NFL OLB like another player we all should remember.

Kenny Moore - Kenny got drafted by the Lions in the 5th round last year and we all have seen how the Lions like to draft WRs. When I asked Sean Yuille of http://www.prideofdetroit.com/ if he knew exactly why Moore was let go during the season he said that,

"He was released simply because there wasn't room on the roster for him at receiver.  His main skill is returning, and the Lions had someone that could return and receive."

But the way Kenny Moore put the Wake team on his back the two years prior it was clear he would be given a chance somewhere. That somewhere happened to be right down the road in Charlotte. With the Carolina Panthers he will have the opportunity to learn from one of the best undersized wide receivers in the league in Steve Smith. Kenny knows that it will take a lot of effort to make it as he said in an interview during the season with the Winston-Salem Journal (Home Cooking),

"My main thing right now is to show them I can contribute down the line," he said. "It's all still real new to me with a new offense, new team. I have to show them that I can pick up the offense and I can step in there and contribute. You've just got to come in ready to work each day and ready to show the coaches that your focus is 100 percent here."

Steve Justice - Justice was the leader of an offensive line that gave Riley Skinner enough time to become one of the most accurate passers in the country. Because of this he was taken in the 6th round by the Indianapolis Colts. Justice ended up appearing in eight games throughout the season and picked up one start. Steve shifted over to guard in the NFL even though he had an early shot to get some starts at center with Jeff Saturday injured to start the year. Brad (aka BigBlueShoe) from http://www.stampedeblue.com/ said that Justice

"was also passed over for a guy drafted later than him: Jamey Richard. Richard was a lineman drafted in the 7th round out of Buffalo. In training camp, he passed Steve as the back-up center."

Brad said that if he wants to see his playing time increase, Steve will have to put in extra effort in the off-season. Justice is learning what it is like to be in a winning NFL environment and Deacon fans know he has the intelligence to play at a very high level. Once he gets the work in, he will be ready. Colts.com interviewed Steve leading up to the playoffs.

"Justice said a rookie who thinks of the NFL postseason as something similar to a college bowl game quickly learns the difference.

"You look at it like, ‘This is kind of like a bowl,' but it's totally different," he said. "It's not anything like a bowl. With a bowl, you're kind of having fun. Not that we're not having fun, but it (a bowl) is kind of like a vacation with a game. This is business and if you lose you're done. The season's over.

"You worked so hard to get to this point and to make it here, you don't want to make it so that you mess up and lose your opportunity."

With the hard work, Justice will eventually get his opportunity to play alongside the veterans in the playoffs.

In the Jeremy Thompson snippet I referenced a former Deacon lineman who became a LB in the pros.

Jyles Tucker- second year player for the San Diego Charges. Brian (aka DaBolts) from http://www.boltsfromtheblue.com/ described his impact way better than I would be able to, so here is the review:

"As an unsigned free agent, Tucker has done better than anyone expected.  A bit too small to play the line in a 3-4 he was nicely positioned to bring pressure from the outside linebacker position.  Certainly AJ Smith liked what he saw when he gave him the big contract in the off season last year.  Tucker has done very well, but he got put in a tough spot this season.  In 2007 he played out of his mind every time he had an opportunity.  He had an amazing game against the Raiders where he had three sacks, a strip and a TD, he also had another forced fumble that season with very limited playing time.  This year when Shawne Merriman went down with knee surgery, Tucker was his replacement, folks expected him to keep up that pace.  Merriman is one of the premier Outside Linebackers in the NFL so those were huge shoes to fill.

They switched Shaun Phillips over from weak side to strong side and had Tucker play weak side.  Tucker had hamstring problems intermittently throughout the season which limited his production.  He was much better in straight passing downs when he was blitzing, but had a tendency to overpursue against the run, struggled some with open field tackles and was totally lacking in coverage.  Tucker put together a solid season, if he had another year to develop behind Phillips and Merriman it would have been much better.  When Ron Rivera moved Tucker to the strong side and had Phillips on the weak side, both seemed to pick up their play.  Jyles came up huge in the Chargers one playoff win against the Colts; he made a number of stops but also forced Manning to move around in the pocket.  Next season Merriman should be back and Tucker can work on some of his weak spots.  Right now he is a solid backup and potential starter.  As far as fans go, Tucker suffered from unreasonably high expectations, still he is well respected by all the regulars on Bolts from the Blue."

It's hard to say anything on top of that. Because of his hard work switching from college defensive tackle to NFL linebacker Tucker was rewarded by the Chargers with a five year $14.65 million contract.

Congratulations to all the Deacons enjoying life in the NFL and thanks to all the bloggers the helped me out. Check out their stuff.