Share All sharing options for: The Wake Forest Enigma

After watching the Deacons roll over Florida State many Deacon fans are probably scratching their heads in confusion. How is this the same team that got smoked by Miami, taken care of by GT, and dominated for the majority of the game against NC State? 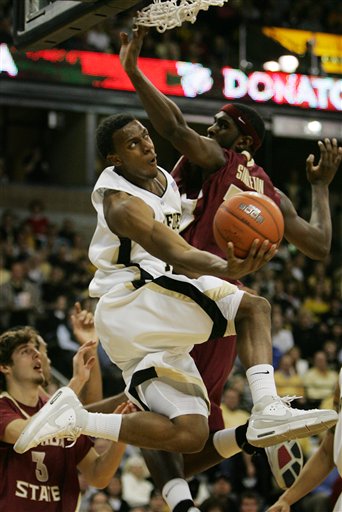 Wake Forest ended the first half up 12 and after a brief surge by Florida State to begin the second half the Demon Deacons extended the lead all the way to 30 before finishing up 23. Wake Forest won the game 86-63 on 49.1% shooting from the floor and 84.2% from the free throw line. The Demon Deacons limited their weakness by only attempting 11 3 pointers, hitting 2. Florida State entered the game ranked 9th by KenPom in defensive efficiency. With the size inside many expected a defensive struggle for both teams, but Wake Forest was able to score 57.1% on 2 point shots. Wake Forest's defense also came up big holding to 38% shooting and only 4-22 from 3.

Wake Forest was able to take advantage of the quick whistling refs by getting to the free throw line a whopping 38 times, hitting 32 of them. There were a total of 51 fouls called in the game, 27 called on Florida State and 24 called on Wake Forest. At one point there was even a flagrant called and Florida State's starting center Alabi was sent to the locker room with 14:07 left in the game. There didn't seem to be any real malice in the collision but the refs were put in a tough position with the elbow to McFarland's face.

Overall, Wake came out fired up and after meeting some early Florida State resistance was able to expand the lead. The team that came out tonight against a very tough Florida State team was nowhere to be found earlier in the week. When is Wake going to be able to put it all together on a consistent basis to pick up wins throughout their ACC schedule? This effort can't only come at home or against the big name teams. They have to be able to put this kind of effort into every game the rest of the season to build a strong resume and possibly get a first round bye in the ACC Tournament. We shall see if they have learned their lesson including what they are capable of doing if they put the energy on the floor for an entire game.