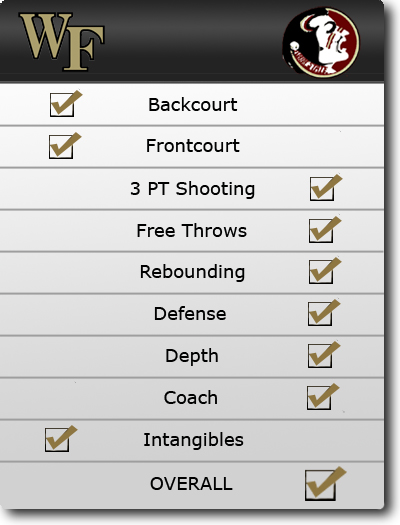 Backcourt: Jeff Teague/LD Williams vs Tony Douglas/Derwin Kitchen: Each team has one stellar guard, Teague and Douglas. Douglas comes in averaging 20.3 points a game and shoots 34.7% from three. Jeff Teague was taken out of the last game by NC State's box-and-one defense but can still go off on any given night. It comes down to the next level of guards and Wake takes a very slight edge here on Kitchen vs Williams.

Frontcourt: James Johnson/Al-Farouq Aminu/Chas McFarland vs Uche Echefu/Chris Singleton/Solomon Alabi: All three of Florida State's frontcourt average right around 8 points per game, and their defense is what makes them good. Florida State uses their size well to swat a lot of shots which could be trouble for a driving Jeff Teague. Chas McFarland has not been showing much lately but Johnson and Aminu both have had their share of great games recently. Aminu got in foul trouble early against NC State and was a non-factor most of the game but if he can stay out of trouble and play close to the level he was against BC he will be scary for opposing defenses.

3 PT Shooting: This goes to FSU for shooting a slightly better percentage (.333 to .330) and the fact that they use the 3 point shot more than Wake. Wake Forest has really been struggling from deep and it will be hard for them to take this category from anyone.

Free Throws: Florida State takes down another category even the percentages are very similar. Florida State comes in at .707 and the Deacons come in at .702. What tips this one to FSU is that it is also a bigger percentage of their points and Wake has been shooting worse than their percentage would indicate lately. Wake Forest comes in off a 9-16 showing and prior to the win against BC they shot 11-18 against Miami and 10-17 against Georgia Tech. Also Wake is tied with Georgia Tech for most personal fouls in the league, so this very well could mean FSU will spend a lot of the day at the charity stripe.

Defense: This is both teams strength thus far in the season. Wake Forest ranks 8th in the nation, according to KenPom, in defensive efficiency and Florida State is 9th. FSU comes in holding their last three opponents to 57,61,58, all wins. Florida State ranks better than Wake in both block % and steal %. Add to that Wake is coming off a very poor showing defensively and offensively against NC State and FSU gets the category. When Wake puts in the effort on the defensive end their chances of winning exponentially increase, it remains to be seen whether or not that will happen against Florida State.

Depth: Wake has sporadic contributions from their bench. The second half of the BC game Tony Woods looked like he was coming into form, but he needs to prove that he can do that more often. Gary Clark came in and knocked down some shots against NC State but that is the first time we have seen him show life on the offensive end. Florida State brings good size and talent off the bench, and ranks 64th in the nation in bench minutes, compared to Wake who comes in at 204th.

Coach: It looked like Dino had turned the corner and got the team motivated against the unranked teams after the BC game. Then Wake Forest came out flat against NC State and couldn't get any real spark until the last 4 minutes of the game. Leonard Hamilton has his team at 6-3 in conference and 19-5 overall, which is good enough to be tied for third and looking at a first round bye in the ACC Tournament.

Intangibles: Finally Wake gets another category. Florida State is carrying some momentum into this game off of three straight wins, but Wake nearly always plays well at home. Added to that is Florida State's 25 ranking which should get the Deacon players up and ready to game. The sour taste of the last game will hopefully have the Wake players ready to get back on the floor ready to defend their home court.

Overall: This is tough to say as a Deacon fan but as of right now Florida State is the better team. They are just playing better more consistent basketball. Wake has shown some flashes but 2-4 in the last 6 games is not cutting it. They have had a huge let down after starting off the ACC season strong. After dropping their first conference game to Duke, Florida State has picked it up going 6-2 in their last 8. Florida State beat Clemson in Littlejohn Coliseum two games ago and then took care of Virginia at home before traveling to Winston-Salem. Wake is more than capable of winning this game but it would be a lie to try to justify that they are the better team right now. This should be a very entertaining matchup of 2 Top 25 teams, which Wake desperately needs to stay within striking distance of a top 4 ACC finish.