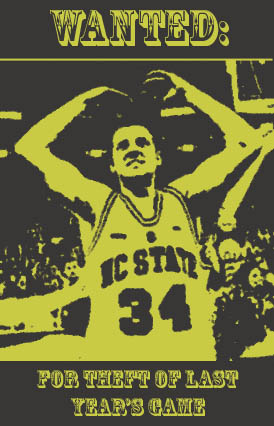 Wake Forest has payback on its mind when it goes to Raleigh on Wednesday to take on an N.C. State team that has yet to win an ACC game in regulation this season.

Wake Forest (18-3, 5-3 ACC) hasn't traveled to the RBC center since February 3 of last year, when Ben McCauley dunked in a Gavin Grant miss with one second on the clock to beat the Deacons 67-65.  While Wake hasn't forgotten that loss, McCauley and the Wolfpack are just trying to remember what it's like to win an ACC game in regulation.  The last time they won a conference game in 40 minutes was February 5 of last year, just two days after they beat Wake on the buzzer beater...

Still, the Wolfpack (12-9, 2-6 ACC) have won two ACC games this year, both in overtime, and both at home.  In conference play this season, N.C. State is averaging about 10 points per game more at home than on the road.  In fact, they haven't won an away game of any kind since their first game of the season, beating New Orleans by just six.

And although State will be happy to play on their home court, Wake Forest has shown an ability to win on the road this season.  Before losing back-to-back road games at Georgia Tech and at Miami, Wake ended BYU's then nation's best 53-game home winning streak, beat an undefeated Clemson team on the road, and won at Boston College... by 20.

The Demon Deacons completed the season sweep of the Eagles this past Sunday, defeating Boston College 93-76.  This win may prove to be a turning point in the young team's season, after losing three of their previous four.  The difference was more consistent passing and ball control from the Deacs, who had 16 assists to only 12 turnovers in the game.

The key stat to keep your eye on in Wednesday's match-up is turnovers.  N.C. State doesn't have a true ACC-caliber starting point guard, while Wake has two in Teague and Smith.  Neither Wake nor State is particularly good at protecting the rock on offense, ranking 163rd and 228th respectively in turnover percentage (turnovers per possession) on offense.

The difference is that Wake is good at forcing turnovers on defense, whereas the Wolfpack rank in the bottom 15 in the nation in that category.  If they want to stop the Deacons' high-powered offense, N.C. State, who has had 42 turnovers in their past two games, will need to hold on to the basketball.