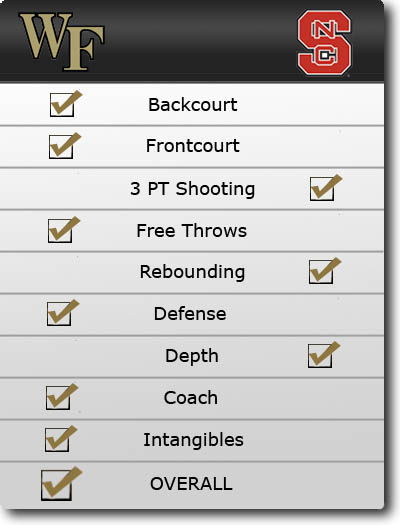 Backcourt: Jeff Teague/LD Williams vs Javier Gonzalez/Courtney Fells: Wake takes this category in large part because of the way Teague regained his all-ACC form with his 27 point, 8 assist effort against BC. LD had a solid game with 11 points and shut-down defense in the second half against Trapani. The starters for NC State are in flux because of the suspension issues that are plaguing the team right now. Fells is a consistent shooting threat, hitting just over 40% on the year from three. Gonzalez started and played 36 minutes in NC State's last game, but doesn't really stand a chance in the match-ups at point guard.

Frontcourt: James Johnson/Al-Farouq Aminu/Chas McFarland vs Brandon Costner/Tracy Smith/Ben McCauley: Wake's major strength matches up with the strength of NC State. NC State has a good front line with an underrated center in McCauley (check out this rundown). Costner leads the team in points at nearly 15 per game, shooting 48% from the floor and 37% from distance. He is also second on the team in assists, averaging 2.4 a game. Tracy Smith has seen his playing time increase over the year putting some solid minutes in for the Wolfpack. While Chas struggled after regaining his starting role against BC, Johnson and Aminu both came up big. Johnson had a double-double with 12 and 10, while Aminu set his career high in points at 26. He was 8-9 from the field and even hit his only three pointer attempted. If this offensive assertiveness takes over from here on out, this team will be tough to beat.

3 PT Shooting: Pretty easy category to judge because NC State shoots a better percentage and a higher percentage of their total points come from 3 pointers. Hence, NC State takes down the category.

Free Throws: Wake takes 6 more free throws per game and makes 4 more per game. NC State shoots a slightly better percentage, but aren't able to get to the line enough to get the edge in the category. Keep an eye on this though because NC State was able to get to the line 39 times in their most recent game. Wake shot exceptionally well as a team, hitting 25-30 against Boston College.

Rebounding: This is a really tough category to call. Wake averages 4.5 more per game, however Wake has a much higher tempo (9th in the country vs 260th) leading to more possessions per game. The nod goes to the Wolfpack because they are 43rd in the country in offensive rebound %. As seen in the first half of the Boston College game, Wake Forest can struggle mightily against aggressive offensive rebounding teams.

Defense: Another easy category, Wake Forest is right now 8th in the country in adjusted defensive efficiency according to KenPom, while NC State is middling at 166th in the same category. NC State fell apart at the end of the Virginia Tech game, allowing 30 points in the last 12:40 of the game. Wake Forest on the other hand comes in after shutting down Boston College in the second half of their game. Boston College struggled, scoring only 29 points in the entire second half.

Depth: Ishmael Smith has been stepping up for the Deacons and Tony Woods had a very good second half against BC, but in general Wake Forest's bench has not been playing much of a factor. NC State is 11th in the nation in % of minutes played by the bench at 40% of the game. With suspensions up in the air, NC State's bench might suffer, but up to this point the bench is being used much more by NC State than Wake Forest.

Coach: Coming off an important win for the Deacons confidence, Dino Gaudio gains some credibility in the average ACC games. Sidney Lowe's team absolutely collapsed at the end of their last game finally losing in overtime to Virginia Tech. The way Dino made halftime adjustments to take down a 17 point win combined with how State fell apart gives Wake Forest the edge here.

Overall: The Demon Deacons from top to bottom are a better team than NC State. Wake enters the game at 18-3 (5-3) and NC State comes in 12-9 (2-6). Wake traditionally has troubles winning at State and had a huge letdown off a tip in at the buzzer last year. This year should be a different story as Wake has the talent and experience to topple the Wolfpack in the RBC Center.