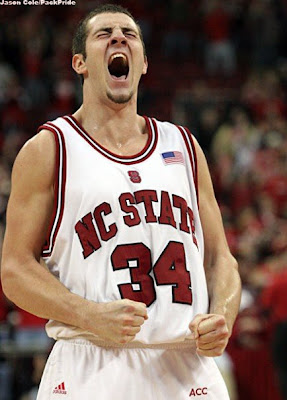 Most Deacon fans know McCauley as the guy that James Johnson failed to box out in the final seconds of last year's buzzer-beating loss on Super Bowl Sunday.  McCauley trotted down the lane and slammed down a Gavin Grant miss to continue Wake's woes in the RBC Center.  Although this season has been disappointing thus far for the Wolfpack, McCauley has been more than solid.  What sets him apart from other big men in the ACC though?

The stats may not back me up as much as I would like on this, but from watching several State games over the past 4 years, I really appreciate Ben McCauley's passing ability.  Big Ben is the one remnant of Herb Sendek that is still evident in Raleigh, as he often hits slashers perfectly when he backs his defender down in the paint.  This is one skill that many of the premier post players in the ACC, such as Hansbrough and Booker, do not possess.  Once they get the ball with their back to the basket, it is going up no matter what.

As for this season, McCauley is averaging a solid 13.5 points, eight rebounds, and 2 assists per game.  The best news for State fans is that his last game was his best one:  A 25 point, 15 rebound performance in a crushing overtime loss at Virginia Tech.  Wednesday night should be a bigger challenge for Ben, as he tries to manage his way around Wake's numerous big men.

While it is unclear who will have the assignment initially, he is sure to see a combination of long arms with McFarland, Aminu, Woods and Weaver rotating duties.  As we have seen several times throughout the season (and as I predicted in the Lawal article as well), McCauley has a chance to collect some garbage buckets against the sometimes poor defensive rebounding of the Deacs.  He certainly does not lack the effort and intensity to pull off a great performance on the boards and will likely hurt us again if we do not commit to boxing out instead of going for the big block every time.

Finally, I'm a Ben McCauley fan because he does not back down at any point in the game.  This was best exemplified in his final home game against the Heels:

Let's hope James puts a body on him tomorrow...