Should Ari Stewart start for the Demon Deacons?

Share All sharing options for: Should Ari Stewart start for the Demon Deacons? 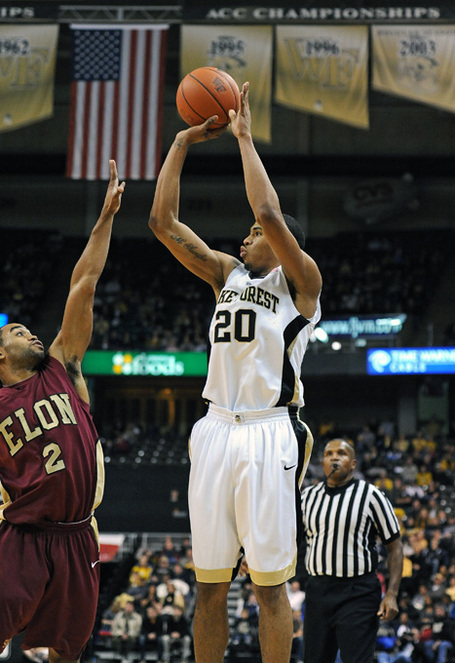 We've certainly seen a surge from freshman forward Ari Stewart in the last two games. His skilled combination of dead-eye shooting, size and decent ballhandling make him a dangerous offensive player for the Demon Deacons. Together with C.J. Harris, there is a youth movement brewing at Wake Forest. So the question needs to be asked:

Should Ari Stewart be starting...?

If Ari were to start, he would be slotted into the SF position where L.D. Williams currently resides. The senior is known for his defensive presence, but is not known for his shooting ability (although his athleticism is unquestioned). So Wake would be banking on Stewart's ability to shoot the basketball.

Two problems immediately stick out--can the freshman handle a starting role? And is the downgrade in defense worth it? Admittedly, Ari is not a very good defender. This is usually the case with freshmen as they adjust to the change in speed.

But there is nothing that suggests he cannot get to a level he needs to play. He has a big wingspan and he is definitely quick enough to play the SF position. He could afford to gain about 10-15 pounds of muscle, but that'll come as he hits the weight room and he is still strong.

Obviously per 40 is not exactly accurate, but it is a valid indicator. Ari projects to double the points and more rebounds. Wake focuses a lot on rebounding, so this cannot be discounted. L.D. is shooting a decent percentage, but his 3pt % is still a cause for concern. Both are not exactly stellar FT shooters, but Stewart has only taken 7 compared to L.D.'s 13.

L.D. is easily one of the more vocal leaders on the team and his energy is infectious. But does that constitute starting a position that he is undersized at when his perimeter shooting is a weakness?

Wake has had a lot of problems spreading the floor and busting the zone the last few seasons and Ari provides the team a way to extend the zone, hit shots and open up the middle for the bigs, something that the Deacs did a good job of against Elon.

Williams could come off the bench as the 6th man, instantly gaining "microwave" status for his athleticism and his defense. He can be subbed in for matchups and even come in at the SG position in certain rotations.

It comes down to whether or not Stewart can perform at a high level if his minutes increase as well as whether or not Dino Gaudio wants to trade defense for offense. If Ari can make great strides on the other end of the floor, then the argument gets a lot stronger.

C.J. Harris has already broken through in a starting role. Is Ari Stewart next?