Deacon Dump 12/11: Finally back in action

Share All sharing options for: Deacon Dump 12/11: Finally back in action 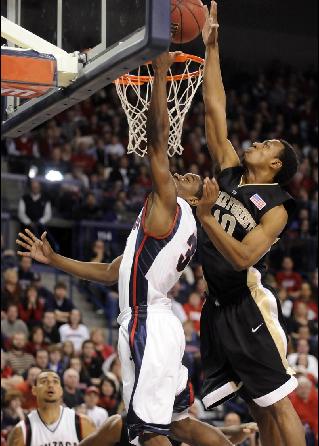 It feels good to know that we'll have a game again. With college football on hiatus and this being exam week, it's a bit slow. But at least the Browns won! That's about as rare as an eclipse. So here's some links on your Friday while you try to sneak out for the weekend. The college cup starts tonight and the Deacs' matchup against UVA should be a great game.

True Blue: NBA Stock Up/Stock Down
AL-FAROUQ AMINU, Wake Forest: Aminu was already getting heavy consideration in the Top 5 before the season started and his play thus far has confirmed why. Aminu has had three straight 20-point games and is averaging a double-double this season (16.4 ppg, 10.1 rpg). The only thing that is going to hurt him is that he’s not that great of a shooter so he will have to put on a lot of muscle if he wants to play the 4 in the NBA. Either that or work on his outside shot so he can be converted into a 3 man. Conclusion: Stock Up

Akron Zips, North Carolina Tar Heels, Wake Forest Demon Deacons and Virginia Cavaliers face off in men's College Cup - ESPN
"We were a decimated team, very young and inexperienced," Vidovich said. But there's little athletes love more than adversity, and thanks to the senior leadership of Zack Schilawski (leads all ACC scorers with 11 goals, 27 points on season) and the net-stopping dives of Akira Fitzgerald, the Deacs are making their fourth straight College Cup appearance. And for those with some sort of memory loss, they also took home the title in 2007.

The Rapids Undercurrent: College Cup Preview #2
Coach Vidovich has done an outstanding job with this group considering the loss of some great talent plus the absence of Opara in the middle of the season. This team has it all. It is built with great athleticism, experience and is really electric going forward.

Top-seeded Akron plus 3 ACC teams make College Cup - USATODAY.com
"We appreciate the ACC inviting us to their conference tournament this weekend," joked Caleb Porter, the coach of top-seeded Akron, the only non-ACC team among the final four. "No, we're aware that even though we've been ranked No. 1 in the country all year long and we have the record that we have, people are probably putting us as an underdog."

Familiar faces in College Cup | Charlottesville Daily Progress
"Any time you play a team three times — getting a result three times against a good opponent is not the easiest thing in the world," said Virginia coach George Gelnovatch. "But I don’t think there’s anything I lose sleep about or dwell upon with them. Our focus is on us. Certainly, we have respect for Wake, but most of what we’ve been doing is getting ourselves ready."

Texans' Cushing, Seahawks LB Curry rock rookie wall | Houston Texans Football | Chron.com - Houston Chronicle
He's an impressive kid," Texans coach Gary Kubiak said about Curry. "He's big, fast, smart and talented. "When he came to our room at the combine, he looked like a defensive end. When he walked out of the room, I looked at (general manager) Rick (Smith) and said something like, ‘Gosh, that kid's impressive.' And Rick said, ‘Don't worry about him. He'll be long gone before we draft.' "

College Sports | Zags Men's Hoops: Elias Harris, freshman from Germany, feels at home with Bulldogs | Seattle Times Newspaper
Right about then, that's what Harris did to Wake Forest's Chas McFarland. As a three-point shot went up, Harris pivoted and forearmed McFarland in the neck. McFarland tumbled backward, Harris was assessed a flagrant foul and ejected and Wake swung the momentum toward an eventual 77-75 victory. "I just think it's somewhat confusing to him," says Few, who took issue with the ejection. Meanwhile, Harris said afterward, "My feeling is, I did nothing wrong."

Soccer Notebook: Keeper Fitzgerald says Deacs play extremely well as a team
"Obviously last year's team was very special with the talent we had," Fitzgerald said. "But I think this team, everybody plays for each other, and that's big. Last year's team was the same way, but we have all made a difference in each practice this season." The Deacons finished 21-2-1 last season but lost eight starters. "I think obviously when you lose players like Sam Cronin, Marcus Tracy and Mike Lahoud, talent-wise last year's team might have been better. But we always talk about maybe not being the most talented team, but we talk about being the best team."

Suspense, but no Cinderellas, at Final Four - NCAA - ESPN Soccernet
The Demon Deacons boast the best of the best in the ACC, led by the conference's coach of the year (Jay Vidovich), offensive player of the year (Corben Bone), defensive player of the year (Ike Opara) and two more first-team all-conference players (Zack Schilawski and Austin de Luz). Wake Forest clearly has the experience a team needs to be successful in December, but while having been there before is definitely an asset, it's not enough to carry a team.