Share All sharing options for: The 10 Most Embarrassing College Basketball Losses of the Last 10 Years 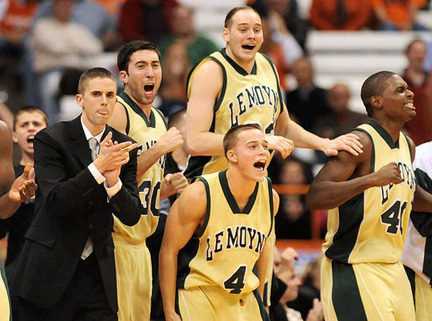 Losing to a Division II school on your home court sure is embarrassing, but where does Syracuse's humiliation at the hands of Le Moyne rank among the most embarrassing losses of the last decade?

Ok, so East Central isn’t exactly a college basketball powerhouse, in fact, they aren’t even in division I, but to give up 167 points in regulation is embarrassing no matter who you are. In one of the highest scoring game of the modern era, the Texas Tech Red Raiders made an astonishing 67 of 113 field goals, helping them reach the unthinkable total of 167 points in 40 minutes (4.175 pts per min). So how does a score like this happen? Well it may have been East Central’s 29 turnovers, or perhaps it was Texas Tech’s 62 rebounds, maybe even their 18 steals. However it happened, the Tigers of East Central are the only team in the history of college basketball to put up over 110 points and lose by at least 50.

In January of 2004, a battle of college basketball’s Golden Eagles was sure to be a blowout… and it was. The #21 Marquette Golden Eagles (11-3) were nine and a half point favorites over the Golden Eagles of Southern Miss (8-6), making So Miss a 4:1 underdog. They didn’t just win, though, they slaughtered in a 22 point embarrassment. never fully recovered from this loss, going 8-8 the rest of the season and missing the NCAA tournament.

For the first time in the history of the 64-team bracket, all four #1 seeds made it to the Final Four in 2008. So when #1 was favored by three points over #1 , everyone thought… "that sounds about right." Wrong. In what was sure to be a close, hard fought battle between two goliaths of college basketball, the Tarheels found themselves down 40-12 with five minutes to go in the first half. Given the importance and national publicity of this game, 9:20 PM ET on April 5, 2008 might set the record for most people pointing and laughing in at one time. Despite their comeback attempt in the second half, the final spread was ultimately 18 in favor of the Jayhwaks. Luckily for UNC, many people had turned the game off by then.

It came as no surprise that the 11th ranked Aggies defeated the Tigers of Grambling St. in 2006. In fact the game was expected to be such a blowout that there was no betting spread available. Though, I doubt it would have been 74. Ranking as the 10th largest margin of victory since 1938, Texas A&M’s 74-point domination started with a 28-0 right out of the gates. By the time the Aggies stretched their lead to 52-10 with 3:46 left in the first half, the game was statistically over. Texas A&M’s 3.74:1 single game points scored ratio still ranks as the largest in the shot clock era.

They say it’s not how you win, it’s if you win. Last year’s team proved that the same cannot be said of losing. See, it’s not embarrassing that the Wildcats lost to UAB and USC, it’s how they lost. Both contests were tied with less than 2 seconds to go in regulation and the opposing team had the ball well beyond half court: a situation that almost always leads to overtime. Someone should have told sophomore Jamelle Horne. In both games, Horne intentionally fouled, sending the other team to the free throw line, wherein both instances the opposing player made one of two free throws. Game over. Twice. For this to happen twice to not only the same team, but to the same player in the same 2 month span is both unheard of and unforgivable. It is assumed that Horne was unaware the games were tied, and instead thought his team was losing. *sigh* If only he had known that wasn’t losing, not yet at least.

A 15-seed has only beaten a 2-seed four times in the history of the NCAA tournament, and one of those unlucky four losers was in 2001. Favored by seventeen and a half points over , the Cyclones couldn’t eek out a shot when it mattered, and were stunned in a one point loss. Adding salt to the wound was Iowa State’s 6 for 16 free throw performance (37.5%) and the fact that Hampton went on to get crushed by Georgetown in the next round, 76-57. The inevitable chants of "there’s always next year" must have fallen on deaf ears for the Cyclones, as they have only one NCAA tournament appearance since their 2001 loss. (2005).

In the 2004-2005 college basketball season, the North Carolina Tarheels only lost four games: to Georgia Tech in the ACC tournament, at Duke by one point, at , and at . Now let’s play "one of these losses is not like the other." If you guessed , you’re right! Not only was a below .500 team in the less than stellar West Coast Conference, but they won by 11. In fact, the game was never really that close in the second half. Granted, it was UNC’s first game of the season, but that doesn’t change the fact that this may be the all-time worst loss by a team that would go on to win the championship.

Finally, Le Moyne is getting the respect they deserve… that’s what fans were wishing the headlines said Wednesday morning. Instead they went something like, "25th ranked embarrassed by Div. II Le Moyne. In one of the biggest upset in recent memory, the Dolphins of Le Moyne shocked perennial powerhouse on the ’s home court. Even though this was an exhibition game, losing to a DII school who was picked to finish fourth in their own conference is embarrassing where it counts against your record or not. It also doesn’t help that Le Moyne college is a 6 minute drive from . View Larger Map Also, did I mention they’re the dolphins?

Reminding us that not all records are good ones to hold, the St. Louis Billikens managed to only score 20 points in 40 minutes, the lowest since the inception of the shot clock in 1986. Besides the fact that shot clocks were actually 45 seconds long until 1994 (allowing for even lower scoring games), St Louis’ embarrassment is heightened further by the fact that they had an above .500 team that year. Yet, coming off of a three game win streak, the 9-5 Billikens mustered a field goal percentage of only 14.6% (7-48). I highly encourage you to check out the box score (linked above) and pick out whichever embarrassing stat you find most amusing.