Q&A with Georgia Tech blog From The Rumble Seat

Share All sharing options for: Q&A with Georgia Tech blog From The Rumble Seat 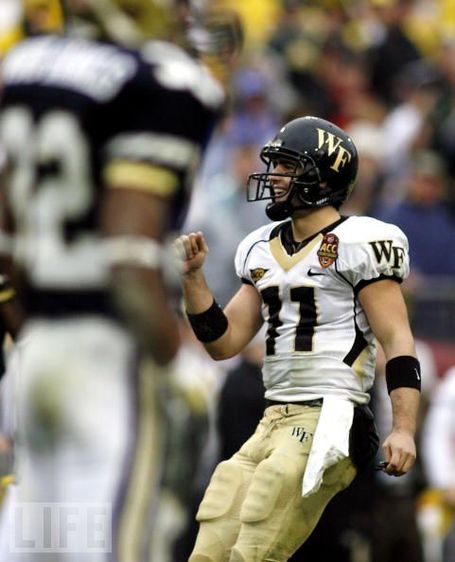 I had to bring that picture back out of retirement. Continuing in our Q&A series (although it's been a little while...), we got the chance to talk to the excellent Georgia Tech blog From The Rumble Seat. We answered some of their questions over there, so definitely check it out. Here are their answers to ours.

1.) The GT defense is giving up just under 25 points per game. Is this a concern, or do you play fully expecting to outscore opponents?
It is a slight concern. However with the way the offense is rolling right now plus our defensive adjustments, we [the fans] feel almost invincible. Since the Miami debacle in late mid-September, the Jackets have allowed only 7, 14, 9, 20, 3, and 3 points in the 2nd half respectably. While those numbers are fairly comforting, we have still seen a lot of missed tackles and overall poor play in the 2nd half. Like you said however, our offense has put up 14, 14, 21, 21, 21, and 28 points in the 2nd half. So we're nervous but confident thanks to our offense.  We kinda feel like we'll give up some points but at this point our offense is so efficient it doesn't matter.
2.) Going off of the first question, what is the game plan to stop the Demon Deacon offense (this is assuming that Riley Skinner will play)?

I think Wommack's key will be stopping the run.  Wake, like Tech, is all about time of possession and protecting the football.  The key to winning that battle is stopping Wake's running game and getting the WFU offense off the field.  We want to force predictable playcalling by forcing long 3rd downs against Wake.  All in all, we really don't know what our defense is planning or if they even plan on playing Saturday.  We kinda just hope that we score 40 points and the 00:00 flashes on the jumbotron with GT in the lead.  If Wake wants to play in a track meet, we'll let 'em.  If Wake only wants to score 20 points, then good luck to ya.

3.) You guys asked a good question and I'd like to pose it back to you: give us one player we have not heard of but we should know?
I'd be surprised if you haven't heard of him as he is one of our stellar A-Backs but watch out for Anthony Allen. The Louisville transfer not only can run the ball well, but he throws killer blocks that gives our other runners the additional yardage needed for those infamous 10-minute drives.  On defense, watch for #41 Anthony Egbuniwe. Anthony transferred to The Flats from Tulsa in 2007. He progresses with every week throughout the season. He is Derrick Morgan's bookend and is seen in the back field quite a bit causing a disturbance on the quarterback. (ed. note:) Egbuniwe has 2.5 tackles for loss, 1.5 sacks and 2 forced fumbles this season.

4.) What makes Jonathan Dwyer so dangerous?


5.) Be honest. Are you worried at all about this game?
I wasn't worried about Wake in 1999 or 2006 but you guys shot us in the ass both times.  If our defense plays like they have all season at home, then no there shouldn't be a problem.  If we give up multiple plays of 50+ yards like we did against Vandy, then we'll have a defensive coordinator out on the streets by December.
6.) The option running game is obviously the focal point and Josh Nesbitt is good at managing the game and running the offense effectively, but is he truly a quarterback capable of leading Georgia Tech to an ACC Championship and possibly a BCS win?
I wouldn't take any other quarterback in the ACC over Josh for this offense.  There are some better runners and some better arms in the country but no one really matches Nesbitt's combination of durability, speed, and arm strength.  No other I-A quarterbacks in the country are being asked to do what he does outside of the Service Academies and Tebow.  Yes, we believe we can win the ACC Title with Nesbitt.
7.) Which Wake Forest player scares you the most coming into this game?
Riley Skinner.  Our pass rush has been weak all season and it has allowed the secondary to be picked apart all season.  We also don't have the speed at linebacker to contain Skinner on a scramble.  If he is moderately accurate, he'll have a good game.
8.) Make some predictions. How will the game play out and what do you think the final score will be?
We'll take some predictions from our preview post. Dane has been MIA so far so it's just Bird's and Winfield's predictions.