Q&A with Hammer and Rails

Share All sharing options for: Q&A with Hammer and Rails 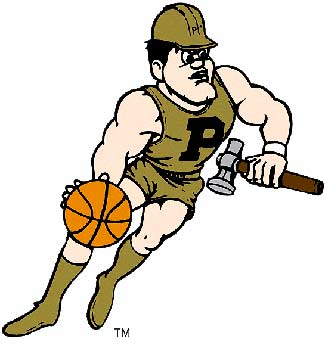 We had a chance to talk with the excellent Purdue blog Hammer and Rails for the Deacs' upcoming game against the Boilermakers on Tuesday. You can find our questions and their answers after the jump.


What does the loss of Lewis Jackson mean for the team?

Not as much as I thought after seeing Kelsey Barlow play in the Paradise Jam. We’re used to playing point guard by committee. Keaton Grant and Chris Kramer played that role in the 2007-08 season before LewJack arrived. They can handle things, while Barlow grew up quite a bit as a freshman in the Virgin Islands. If there is such a thing as a fortunate injury it is this one because we are so guard heavy. Even former walk-on Mark Wohlford can bring the ball upt he floor a little. Where we miss LewJack the most is his ability to penetrate and score. Barlow isn’t quite there yet, but he is getting close.

How do you plan on defending Wake's bigs?

This is where injuries can be an issue. 6’9" freshman Sandi Marcius has yet to play because of a foot injury, but he is very close to returning. He may even be back for this game. We need him. Aside from JaJuan Johnson we don’t have a true, dedicated post player. Robbie Hummel is a good rebounder, but he plays on the perimeter more offensively. Freshman Patrick Bade has done well in relief of Johnson so far, but he is still very green. Both Bade and Johnson fouled out against Tennessee and we were lucky the Volunteers did not attack the paint on the final play.

To be quite honest, our lack of depth on the interior is a major reason that I think we are one year away from truly contending for a national championship. We have JaJuan Johnson and that is it. We have some promising bigs coming in the next recruiting class, but they won’t help us this year when they are still playing high school ball. We will be fine if we can keep JJ out of foul trouble, but that is a big if.


Obviously we know what we're getting from E'Twaun, Hummel, Johnson and Kramer, but who is the X-Factor that Wake should be looking out for?

Our X-factor is that we can have any player we put on the floor go for 10-15 points on any given night. Case in point: in the Paradise Jam semifinal Mark Wohlford had 10 points (he had four points in his career coming in) and Ryne Smith had 16. These guys are role players, but they carried the day. We are at our best when our role players like Smith, Wohlford, Grant, and other can contribute. They free up the floor for JJ, E’Twaun, and Robbie.


Speculate: Why will Purdue make the Final Four?

Because it is a goal and it is so close to home. I was junior at Purdue in 2000 when we made the elite 8. We fell to Wisconsin in the west regional final. It was out third loss in four games against the Badgers that year. The Final Four was also in Indy, costing Gene Keady maybe his best chance of making a Final Four.

This team is ready for that step. They have seen it on the schedule and know how close it is. I don’t want to make the Final Four. I want to win the whole damn thing.

Depth in the middle. As I said before, we have JJ and that is it. We have another true center on his way in Travis Carroll, but he won’t be here until next year. That is why I want JJ to say for his senior season. He can helped lead us to a title while teaching Carroll as his understudy. We would also have Marcius, Bade, and Donnie Hale (another 2010 recruit) to provide depth in a very weak area this year. Basically, I view our 2010-11 team as the best team in Purdue history is JJ, Robbie, and E’Twaun stay because all the pieces will fit perfectly. If they all stay, anything less than a national title in 2011 will be a disappointment in my eyes.


Who has made the biggest jump from last year?

It is a tie between Ryne Smith and Mark Wohlford so far. Kelsey Barlow, Patrick Bade, and DJ Byrd are freshmen. Event though they are very talented, they are still freshman. Smith was the 10th player in a nine man rotation last year as a freshman. He has improved his game greatly and is emerging as a 3-point shooting specialist so far. He went apeshit in the second half against St. Joseph’s. Anyone who can regularly throw the ball in the basket from 20 feet away like Smith is good enough to be on my team. Wohlford is a great story. He is a former walk-on that was cut as a freshman, worked his way back on the team, and is now a regular contributor as a senior. He is a tenacious defender and every point he gives us on offense is a bonus. He even had a big three in the Tennessee game.

It's prediction time: who wins, what's the score and why?

The Boilers are playing at home, and I will pick this Purdue team against any team in the country in Mackey Arena. The core group has lost only four games at home to Wofford, Duke, Illinois, and Northwestern. The Wofford and Northwestern games were severe aberrations. I saw this team in person systematically dismantle Michigan State in Mackey Arena last year 72-54. Those Spartans then had a pretty good postseason run. I am concerned about Wake’s size, but I can’t pick against the Boilers at home. Purdue 74-70