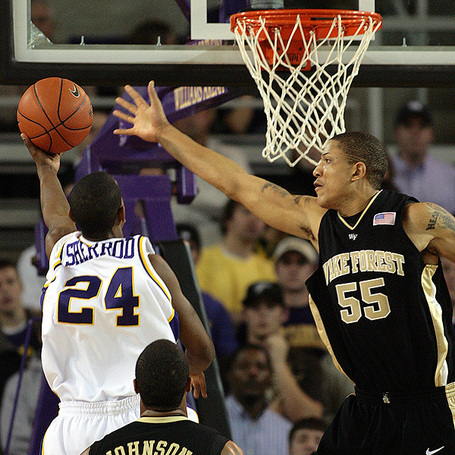 Jake's done a pretty good, well, downright great, job of breaking down the ACC and the Deacs lately. But I figured it was time for me to take my first crack of the year at the Wake basketball team. And I'll start my season off by talking about something that was discussed ad nauseum last year: lineups...

Now obviously what jumps out the most is the loss of James Johnson and Jeff Teague (Fun drinking game: every time an announcer/commentator mentions this, do a shot of Wild Turkey). And naturally that brings up the old rotation question from last year: should the Deacs play bigger with the disproportionate size advantage?

A lot of people wanted to see Teague, LD Williams,  Johnson, Al-Farouq Aminu and Chas McFarland as our starting lineup (and it was, although it did not log several minutes for various reasons). This was thinking of course that Ish Smith would come off the bench, as would David Weaver and Tony Woods.

Well fast forward to this year. Again, the "go big" mentality is there, but with one caveat: there is a new half court offense in place. So what does this mean for the Demon Deacons? Let's look at some possible combinations.

We are most likely going to see this as our starting lineup to start the year. The noticeable difference from last year is the downgrade in ball handling skills. JJ and Teague were very good at taking care of the basketball (although James was a bit careless at time), but this year we have one more big in there and are relying on LD and Aminu to carry the load aside from Ish. I really don't know yet if this will be a problem, but a lot of it hinges on whether or not Aminu has improved his ball handling from last year.

What immediately stands out as well is just how much big this team is. I mean big. We have 6'0", 6'4", 6'9", 6'11", 7'0". This causes all kinds of matchup problems for opposing defenses. Aminu is already pretty close to unguardable at the 3, but to have a near seven foot power forward is even more frightening.

If Woods can step up and decrease turnovers and fouls, as well as play more under control around the hoop, this provides a definite advantage for the Deacs. But this all hinges on Chas staying out of foul trouble as well and LD giving the team better stats than he had last year.

This is a pretty good rotation and I definitely see this taking up a lot of minutes. This forces teams to put a PF on Aminu, who can take him off the dribble around the perimeter, freeing up space for Chas or Woods. This also will probably see some double teams of Aminu, giving LD, Ari and Ish some open shots.

Now if you thought the first lineup was big, I can do you one better. Ari Stewart comes in at 6'7", so for a 2 guard, again we're talking unguardable. This puts a lot of pressure on Ari to handle the ball and that is something he could work on. This is an extremely athletic group and gives Ish a lot of options for screen and rolls, kick outs and alley-oops.

Just to prove we have a lineup in case we find ourselves playing a team like Villanova's from a few years back, here is our super small lineup. Obviously 6'4" Clark is super small for a small forward, but in the thick of things, LD played SF a couple years ago, so it is doable. I don't anticipate seeing this lineup, but it definitely would be a good shooting team.

Another strange configuration, but some kind of combination with these guys, Walker, Aminu and possibly Konner Tucker when he is all caught up after his injury might be seen. Ish is going to need a breather, so Dino Gaudio will have to figure out how to best keep the team focused and still have a floor general out there. Depending on how ready Harris is for ACC play will determine just how much Smith will have to play.

This is kind of a cop out, but I am just having trouble figuring out exactly who will share the floor with CJ if he is starting at PG.

Regardless of how Gaudio wants to go, there are a lot of options for this team. Having Stewart and Aminu is a valuable asset because if needed, both guys could potentially play the 2 through 4, and at the very least, it gives an extremely athletic SF or PF combination.

A lot of what happens with this team will depend on the play of Williams, Clark, Tucker and Harris. If LD can play consistently and put up numbers, it would be really helpful. Between the other three, we will have to watch their production to see what types of lineups we can see. The same can be said for Weaver, Woods, and Walker. Minutes will be determined in a hierarchy--simply, the best performers will get the most minutes.

Loss of Teague and Johnson notwithstanding, this is still an extremely deep team. There is a nice mixture of veteran leadership and youth and a lot of movable pieces. It is just about finding the right fits and it might take a few games to get that together.

Feel free to post your reactions and possible lineups below. We'd love to hear what you guys think.