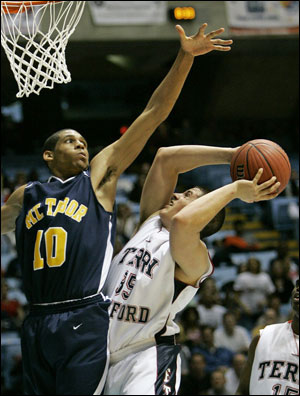 C.J. Harris has been a pleasant surprise for the Demon Deacons thus far into the season, and now that he has three games under his belt, it's time to take a look at what Harris's game is like.

C.J.'s game is not flashy, but that doesn't mean that he will not develop into a vital component to an ACC team. He is not the biggest at 6'2", 175 (and I think that's a bit generous), but his long arms give him a definite advantage defensively. That's what we were most impressed with when we saw him in one of Mount Tabor's playoff games. Harris gave the highly touted Marquis Rankin fits.

In addition to his defensive presence, Harris is earning minutes on the offensive end as well. He has shown an impeccable coolness for a freshman and a very high basketball IQ. Harris does not rush, which is typically a sign of inexperience. Instead, he lets the game come to him and looks for the smart play, whether that means driving and dishing on a fast break, screen and rolls, or a jumper.

C.J. can definitely finish around the hoop. This is a kid who is not afraid to drive into the trees and take a beating to get to the FT line. What this allows the Deacs to do is spread the floor, which gives Harris the lane to either slip a pass to post players or put up a shot that puts the big men in a good position to grab the offensive rebound if it doesn't fall.

We weren't sure what we were getting out of Harris as a shooter, but we've seen some good things. He is averaging just under 9 points in an average of 19 minutes per game. C.J. is not a particularly good perimeter shooter, but he has a great mid-range game. Obviously it is a small sample size, but he is 9/12 this year. Also impressive is his FT percentage, at 80%. C.J. will need to work on his outside shooting, but it is good to see that he knows his limitations, as he's only taken two from deep thus far.

Overall, C.J. has been a very strong contributor so far for the Demon Deacons and it is very good to see a player who can back up Ish Smith and provide quality bench minutes. His poise will allow the Deacs' second unit to stay under control. C.J. is earning minutes with defense, hustle and smart play, and he will see those minutes increase, especially if he can put points on the board.