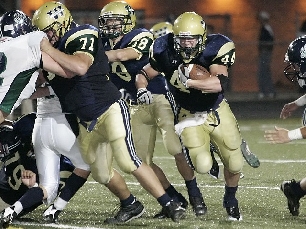 Here is some more good news on the recruiting front. Fresh off the heels of Antonio Ford's commitment to Deacs, RB Ben Emert will be joining Wake Forest...

This appears to be another diamond in the rough for Grobe and the staff. Emert is extremely under the radar. This guy falls completely in the Wake Forest recruiting model--tough kid, strong academics (4.5 GPA!), hard worker, listens to coaches.

ESPN has him ranked as a 72 and shows he also considered Air Force, Wisconsin, Vanderbilt and Georgia Tech. Those are right in our recruiting wheelhouse (seeing as we keep losing guys to Wisconsin...). The WWL also projects him as:

[a] power runner who squares his shoulders in the running lane, takes on tacklers with his pads while finishing runs. Rarely goes down on first hit, showing good pull through ability.

Looks like another good get for the Demon Deacons.