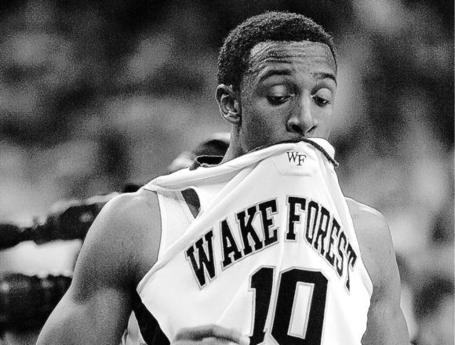 So much today, I won't even bog you down with pointless paragraphs. Just get reading! Oh and Happy Vets and Signing Day!

Finding the ACC favorite is no easy task | tallahassee.com | Tallahassee Democrat
Wake Forest returns a future NBA player in Al-Farouq Aminu as well, but the Demon Deacons lost their two leading scorers (Jeff Teague and James Johnson) early to the draft and — like every other team in the conference — have some question marks as the season gets under way.

Wellman defends Grobe's salary
Wake Forest is paying Jim Grobe the going rate to coach football, in part, to keep him from going elsewhere to coach football. That's how Ron Wellman, Wake Forest's director of athletics, explained a report published in yesterday's USA Today that Grobe made $4.2 million during the fiscal year of 2007-08 -- more than twice as much as any published report. First off, Wellman said that the figure was grossly misleading because it included a deferred compensation package that vested that year and was thus reported for the first time, as well as a restructuring of the contract that involved a substantial back payment.

Out-of-state schools come calling The Post and Courier - Charleston SC newspaper
USC is checking out junior PK Matt Ehasz of Kingsland, Ga. He's also drawing interest from Wake Forest, North Carolina and Virginia. Going into Friday night, Ehasz was 6-for-6 on field goals with a long of 37 yards, and he was 32-for-34 on extra points.

Andy Katz's Daily Word: Taking a shot at ranking all 32 conferences - ESPN
3. ACC: This shouldn't come as a shock, but North Carolina and Duke are likely going to be 1-2 in the league -- and with the nonconference schedules they play, will be in position to challenge for a top-two seed. Then there is a drop-off, with the rest of the league wide open. Georgia Tech has the talent to challenge for the title, and being the only team in the league to play Duke and Carolina twice means the Yellow Jackets will have a chance to affect the race in their favor. Maryland, Boston College, Clemson, Wake Forest, Florida State, Miami and Virginia Tech are all starting the season believing they can make the NCAA tournament. That's 10 of the 12 teams in the league that are in play for bids. That could be a generous number, and it probably won't be more than seven, but the competitiveness from 1-12 has greatly improved.

Top College Basketball Teams Get Called for Fewer Fouls Than Their Opponents - WSJ.com
After scanning more than 4,000 boxscores from the past five years, one statistician concludes that teams that finished the season in the Top 25 got called for fewer fouls.

Wake's Vidovich named coach of the year
"It's a great honor but it's a testament to the players," Vidovich said Tuesday morning on his way to the ACC Tournament in Cary. Voting for All-ACC was done by the conference coaches.

Pahokee pipeline still paying off for Wake - ACC - ESPN
Former Wake Forest cornerback Alphonso Smith continues to have an impact on the Demon Deacons. Smith, former wide receiver D.J. Boldin, and former defensive end Antonio Wilson are all products of Pahokee High, and despite Wake's 4-6 record heading into Saturday's game against Florida State, the program hasn't become any less attractive to the players from Muck City. Wake has received three commitments from Pahokee, including linebacker Zachary Allen, athlete Merrill Noel, and defensive tackle Antonio Ford. Allen is the top prospect of the group, and was also recruited by Pitt, Auburn, Rutgers, Vandy and Purdue to name a few. Noel is the No. 36-rated athlete by ESPN.com's Scouts Inc. and decommited from Florida State. He should take a particular interest in this week's game. And Ford chose the Deacs over West Virginia and Oklahoma State.

Christian Ponder still has role to play with FSU -- OrlandoSentinel.com
"Yeah, that'll be [very] comforting," Manuel said. "Just knowing that he'll be able to give me some tips or he might see something on the sidelines that I don't see out on the field and I know he'll tell me once I get to the sidelines. He'll let me know what's going on."

Smith races to front of Deacons line-up - CharlotteObserver.com
His greatest asset is his speed. There might be no player in college basketball quicker from end to end than Smith, who can sometimes outrun his teammates on the break. The challenge is maximizing his effectiveness as a point guard. "Sometimes he has to go 80 miles an hour rather than 100 miles an hour," Gaudio said. "Sometimes he's going so fast that he'd be better served to slow down."

Former Owen star David Weaver in last season at Wake Forest | Asheville Citizen-Times
"Senior year? It's a little bittersweet," he said at ACC Operation Basketball. "When you are a freshman or sophomore, you don't think about this is going to be your last time going to the Smith Center or Cameron (Duke's Indoor Stadium) or playing in the Joel (Coliseum, Wake's home court). "Now, it's settling in that this is it. It makes you want to give it all you have because you don't want to leave it behind with any regrets."

Deacs go for soccer crown: Storied program has won one ACC title, taken back in 1989
"It's been 20 years, so it will be nice to break it this year," said goalie Akira Fitzgerald, who is part of the winningest senior class in school history with a record of 74-10-9. "The '89 team was here earlier this year, and they want us to bring it back. It's definitely one of our goals."

My Take on Wake - Lombardi Leftover Served Up on a Bed of Bytes | JournalNow.com
Lombardi was plenty complimentary of the Deacons after the game, and had an interesting thing to say on the subject of synergy—something that he apparently felt was in short supply last season at Wake Forest. "I have a sense they have a really good team attitude and their whole may be greater than their parts,’’ Lombardi said. "Watching tape from last year, I’m not sure that was always the case.’’