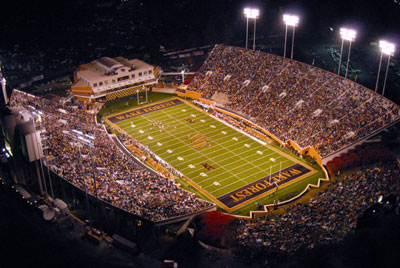 On senior night (although I guess it is senior day since the game is being played at noon), Wake Forest is going to black out BB&T Field as the Deacs take on Florida State. Show support for the guys if you're going to the game and throw on something black.

In addition, the athletic department will be auctioning off the Demon Deacon's motorcycle at halftime. I have no idea how much that is going to go for, but I can safely say that WakeJake would look pretty good driving that thing to class every day.

After the jump, you'll find some quotes from Coach Grobe's presser today.

"As an assistant and as a head coach I've been doing this about 35 years. I've had two or three games in a season where we played right to the wire and came up short, but not this many times."

-He's right. The last time I saw this many close games as a Demon Deacon fan was in the 05-06 basketball season. I know it's not something we all want to relive, but that season saw the Justin Gray-led team lose by six or less eight times. If that team had ANYONE to run the point or a few things had gone their way (paging Trent Strickland), it may have been a completely different season.

"We don't get to see a lot of tape. This is a really talented guy, we know that he's got great skills, the ability to run and throw. He was personally recruited by Jimbo Fisher. I'm sure all the things they're doing with Christian Ponder, they feel like they can do with Manuel."

-Wake has not exactly had a great track record against quarterbacks making their first career start (two losses this year--BC and Navy), so we'll see how Manuel will fare. He'll have a whole week of preparation and was a complete stud in high school. Hopefully the Demon Deacon defense will dial up the pressure and keep Manuel from getting comfortable.

"We're a better football team. I don't think there's any question. I would love to be able to rewind with the team that's playing right now and start the season over again. This would be a pretty special year for us. The way we played against Miami and Georgia Tech, there's no question we're a great football team. One of the keys is keeping our heads up. Our guys don't enjoy playing good teams just tough, we need to win, we need to keep our heads up and come back and play a great effort Saturday against the Noles."

-This is true. The team has definitely improved over the course of the year. Losses and the offensive line's stuggles aside, the defense has improved and it has been extremely fun to watch players like Kenny Okoro, Joey Ehrmann and Gelo Orange grow up. Plus, I am stoked about the chance to see this receiving core for the next couple years. These guys deserve to have a break go their way and you have to believe they will be playing their hearts out to get Riley Skinner to another bowl.

Beating Florida State for a fourth consecutive year would be absolutely amazing. Here's hoping the team can come through on senior day.