Share All sharing options for: Tricked: Miami steals a victory over Wake Forest 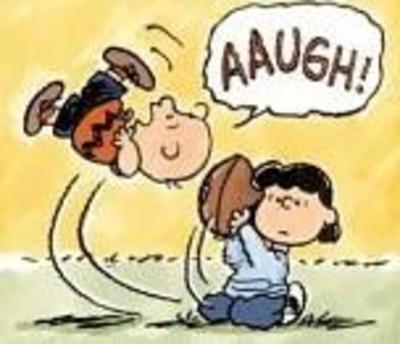 You all didn't think they'd hold on, did you? Show of hands: who thought the Deacs had any chance to win after Devon Brown fumbled the punt and Miami got it at the one? Thought so. It's just amazing how many different ways Wake Forest can lose games. I wish I had that kind of imagination.

Today's was a new story, same result. After that fumble, Wake was up 6 and stayed there for awhile. The defense continued to hold strong (and played a great game despite the fact that they had about a dozen chances at INTs and couldn't hold onto the ball) behind Dominique Tate, Kenny Okoro, John Russell and company. But when the Deacs got the ball back, Riley Skinner threw a pick and later went out with what is probably a concussion.

That gave Miami QB Jacory Harris a chance to put the 'Canes up. The Deacs got it down to 4th and long, but Harris completed an insane pass for the first...yadda yadda yadda, and Miami went up one. Backup QB Ryan McManus had a chance with a minute to go and got a 60 yard FG attempt that was way right. Hurricanes: 28, Demon Deacons 27. Final.

It's nothing new to lose to Miami, but I don't know whether to laugh or cry right now. And I'm used to this stuff...I'm a Cleveland sports fan.

Lobo called a much better game today and the Deacs completely dominated. I mean it wasn't even close. But penalties, mental mistakes and missed opportunities continue to plague the Demon Deacons like they have all year.

And that's why instead of being at around 6-3, this team is at 4-5 and on the outside looking in right now at a bowl bid.