Share All sharing options for: Dan Collins: What happened to Wake Forest's offense? 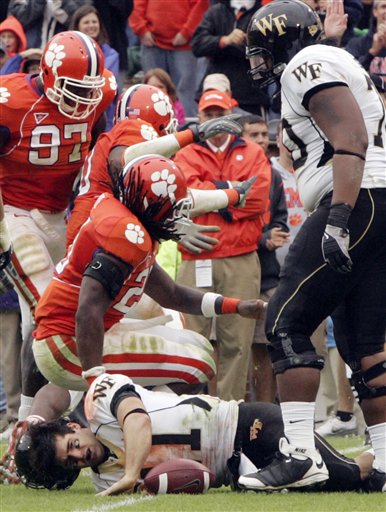 In his blog on Tuesday, Dan Collins asked the question, "Where did Wake's offense go?" This is something I've been wondering myself, and I'm sure just about every Demon Deacon fan has too. I think it's a combination of factors, so I'll do my best to delve into them after the jump...

It's not the normal excuses like: "well the offense isn't that good," or "everyone's hurt," or "we have a new quarterback," or "we're young." And that's the biggest problem. This offense is good. People are healthy. Our quarterback is in his fifth year. And we're not young.

So what is the problem?

First and foremost, it is what has plagued this offense at times all year. They think they have to do it all. This team tries to do too much on every drive instead of focusing on each first down. A running back will try to cut rather than hit the hole hard, a WR in orbit will want to get to the outside and will end up losing yards, Skinner will have happy feet because he wants to make the big play, a lineman will hold hoping to give the RB a lot of running room.

The defense has been inconsistent and is still extremely young. I get that. And the fact that they've given up games of 24, 27, 24, 32 and 38 points really doesn't help. So I understand where the offense is coming from. But Bob Knight once said that the game could be broken up into five minute intervals (or TV timeouts). If the team focused on winning the five minutes and they won enough, they'd win the game. Now he was talking about basketball, but the same can be said for the Deacs. Win each drive.

Mental mistakes are also causing a lot of problems. I haven't seen a team this undisciplined in a long time. The Deacs have been penalized for 425 yards this year and have 10 fumbles/9 INT. For a team that revolved around a high +/- Turnover Ratio, these numbers are staggering. In what was predicted to be a down year, with a team that plays a lot of close games, penalties, turnovers and mental errors are not only drive killers, but game killers (ex: Pendergrass running the wrong way against BC in OT).

Finally, it is no secret that Wake Forest's playcalling has been suspect all year. One game, Wake wants to throw it 50 times a game, the next they'll rush it 50 times. Coach Lobo loves to do this. I've never understood it. Skinner has a lot of success throwing short patterns--slants, outs, wheel routes, bubble screens--so naturally, against Navy, Wake runs the ball every play until the weather gets bad and the team gets in a hole. It doesn't make sense.

This is a team that's strength is in throwing the football. Skinner may get jumpy sometimes and the line has allowed 20 sacks, but still, the Deacs have had way more success through the air. I know establishing the run and time of possession are important to this team, but let's face it, this is a different team that the last few years. There are a new set of strengths and weaknesses.

So, where to go from here? Well, last year against Miami, Wake ran the ball 52 times. 52! If they come even close to that number this year, I guarantee you they will lose by at least two scores.

If the Deacs hope to come out of the rest of the year with better than a .500 record, they need to minimize mistakes and focus on the passing game. Wake needs to force the defense to recognize the pass which will allow effective draw plays and orbit sweeps in motion. The Demon Deacons absolutely have to rely on short routes and if DBs press, then Skinner can gamble on the deep route with his speedy receivers (Y'lou and Givens).

This team has time to right the ship, but they need to decide exactly what they want their identity to be.