What to Watch For: Wake Forest vs. NC State

Share All sharing options for: What to Watch For: Wake Forest vs. NC State 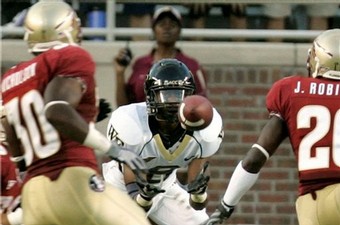 I know every game is a big game in college football, but this one feels like it has a lot more importance than others. The Deacs are reeling and in comes an opponent with just as much riding on this game. State has to prove that the preseason predictions were not a letdown and Wake has to prove that they can in fact play to their potential. Here are a few of the story lines to keep an eye on during Saturday's game...

Leader of the Pack

If you have not heard it by now, N.C. State's defense is statistically the best in the nation going into week four.  So far this season they have only given up 201.3 yards per game, but two games against the sisters of the poor obviously skew that stat to some degree.  Pitt gained slightly over 300 yards and scored 31 points against the Pack last week, but their own defense happened to give up 38.  In addition, Coach O'Brien noted that the Pack missed over 20 tackles against the Panthers, which also seemed to be a big problem in their opener against South Carolina.

State's strength definitely lies in their defensive line.  All four starters are seniors and they are led by a great defensive end in Willie Young.  As a result, it may be tough for the Deacon offensive line to create holes for the running game in addition to giving Skinner enough time to create.  On the other hand, their situation in the secondary is a little more dicey.  This week, the depth chart lists freshman Brandan Bishop and redshirt freshman Earl Wolff as the starters at both safety position.  If Skinner can buy enough time, the potential is there for him to have a field day against the young Wolfpack secondary.

A big weakness for the Wake Forest defense so far this season has been the lack of pressure applied to the opposing quarterback.  The loss of their best pass rusher, Kyle Wilber, to a broken leg was obviously a huge loss for the Deacons.  This week the depth chart reveals that Gelo Orange and Will Wright will get the start at defensive end, with former starter Tristian Dorty rotating in regularly.  This will be Orange's first career start for Wake.

Since Russell Wilson is a dual threat quarterback it will be important for the linebackers and ends to make sure he does not run free. However, if the Deacs give him time to sit back and throw, it will be a likely be a long day for the secondary.  Defensive leaders Boo Robinson and John Russell will be looking to force some pressure up the middle, in addition to the aforementioned ends working to get around the edge.  Wake is hopeful that they can ramp up the pressure, but unless someone steps up significantly, this is an area that they are likely to struggle in for the remainder of the season .

New Faces in the Secondary

Due to the injury of starting corner Michael Williams and Coach Grobe's disapproval of Alex Frye, Deacon fans will likely get the rare opportunity to see multiple true freshmen on the field this weekend. The top candidates are cornerback Dominique Tate and safeties Daniel Mack and Duran Lowe.  While this certainly makes Wake Forest fans nervous against a quarterback like Russell Wilson, the defense needs a spark after poor performances to open the game against each of their opponents other than Elon.

These guys have earned the opportunity in practice to be just that.  The starters will be Ghee and Okoro at corner with Quarles and Bush at safety, but it will definitely be interesting to watch for personnel changes during the course of the game.  I'm sure Coach Grobe and staff are hoping one of the freshman can become the playmaker that the defense seems to be missing
currently.

Jake already discussed State's defense, but the fact remains: Wake's offense has been able to move the football. The same story was told against BC (that BC's defense was the key to their game) and Wake piled on the yards. In fact, the Deacs lead the ACC in total offense at 412 yards per game. Astounding considering the fact that this team has held a lead in just two of its four games.

And that's the key, the Deacs need to find a way to improve their scoring percentage on drives. They can't just move down the field and let the drive fizzle out because of a missed FG, an interception or a fumble or an unsuccessful 4th and short situation.

Plain and simple, Wake Forest needs to execute. Especially against an NC State team that has had no trouble with execution this season. State sits at number two in total offense, but right atop scoring offense at 37.8 points per game.

Class of the ACC

Riley Skinner has had some good quarterback battles in his time at Wake Forest--Robert Griffin, Matt Ryan, Jevan Snead--and this week's could shape up to be another one. Last season, Russell Wilson emerged as a future star for NC State as he scrambled all over the field in a win over the Deacs in Raleigh while Skinner tried to engineer a game-saving drive in the final two minutes that just slipped away.

The rematch is even better on paper. Wilson has not thrown an interception in 364 pass attempts and has thrown for 12 TDs in his last three games. Skinner had over 350 yards passing against BC and absolutely torched Elon the week before. They always say defense wins championships, but quarterbacks make games exciting and this one will have two of the best in the ACC.

Marshall Williams would like to forget that last year's NC State game ever happened. The redshirt junior, who had 26 catches last season, was a 27th catch away from being a hero. Late in the game against NC State, Williams dropped a pass in the end zone that would have won the game for the Demon Deacons.

An extremely gifted receiver, Williams has seemed to put that behind him and has quickly become Riley Skinner's favorite target this season as he has racked up 20 catches for 329 yards including a 12 catch, 180 yard game against BC.

Williams, 6'1" and 185 lbs, is extremely quick and athletic and seems to be improving every game. And if the Deacs are going to beat the Wolfpack, they're going to need Williams to have a big game.