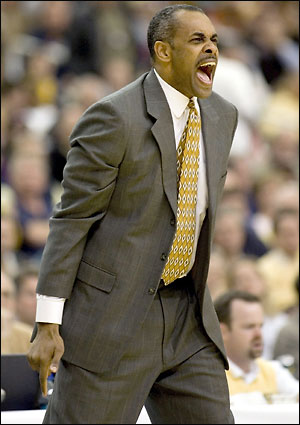 It says something about Georgia Tech's year that the best news they've received all year was that Derrick Favors will be suiting up for the Yellow Jackets next season.

Paul Hewitt sure can recruit, but one-and-done players like Javaris Crittenton, Thaddeus Young and Chris Bosh have crippled the consistent success of the program. Not only that, but despite Hewitt's NCAA Finals appearance in 03-04, the Ramblin' Wreck have only made the NCAAs once in the last four years even with those talented players.

Hewitt's teams have made a habit of underachieving with good talent and this year's squad is no different. They have good guards in Clinch, Maurice Miller and Ivan Shumpert and great forwards in Lawal, Peacock and Al-Farouq Aminu's brother Alade. The fact that the Yellow Jackets are 9-10 and have lost three games in overtime and four other games by six points or less with talented players suggests a combination of poor game management and bad luck.

Hewitt has had a lot of trouble late in games, where his teams seem to crumble. The players will rush shots early in the shot clock, turn the ball over, make poor decisions and take bad shots--as the veteran players suddenly start to play like CYO kids.

Those are not the stats of a team that should have no wins in the ACC through six games. They're too talented, too long and too quick for this. Georgia Tech is a far more talented team than NC State or Virginia this year (and even the case could be made for BC and Maryland too), so why is it that Tech can't buy a win right now? Coaching. Hewitt may get a get-out-of-jail free card for Favors next year, but if he doesn't produce next year, he will be out of a job.

All this said, how does Wake Forest match up against Georgia Tech? On paper, the Deacs should win this game by double-digits. The Yellow Jackets are in the top 50 according to Pomeroy Ratings in defense in the country and near the bottom (271) in turnover percentage. They, much like the Deacs, get most of their points from 2pt shots, and they are not a very good 3-point shooting team. They are big and long inside as Lawal, Peacock and Aminu are great at denying shots. This will be a good matchup and we may see Al-Farouq guard his brother.

The Deacs have the edge defensively and are a much better team offensively than the Yellow Jackets. That with the fact that Wake Forest will be able to easily force mistakes against a turnover-prone, rushed Georgia Tech team.

Wake has played poorly in Atlanta for years now, but this Demon Deacon team is far too talented to blow it this year. The Wreck may keep it close through the half, but by game's end the Deacs will be able to open up a lead of at least 10.

We will see some nice dunks in the game and hopefully Chas McFarland can keep control as he will see a big role tomorrow down low. Jeff Teague should have a lot of success against Tech too if he can finish his drives. Johnson and Aminu will be close to double-doubles.