My Quick Take on Tonight's Game

Share All sharing options for: My Quick Take on Tonight's Game 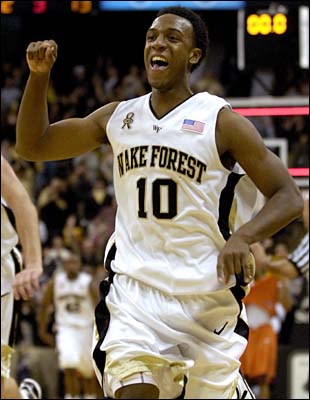 Yesterday I mentioned something about how I would like to see Ish start against Duke for defensive purposes.  While it of course didn't happen that way, I loved the way he was utilized tonight.  He is just the kind of player I love, an under-the-radar type of guy who's consistently doing the things that win games, even though he might be the guy that Raycom Sports interviews after the game, not ESPN.  Now don't get me wrong, I love Teague, and the ninja master JJ, but like the man represented in my profile picture, Willie Idlette, Ish is a guy that seems to poke his head out and make the big plays when it matters most.

Tonight Ish wasn't the guy who lit up the box score....7 points, 4 assists, 2 TO.  When people read the paper tomorrow they will notice Aminu's line, JJ's line, stuff like that.  Ish will be an afterthought, which is exactly why I like the guy.  He's an afterthought, that stepped in tonight and controlled the game.  He's so fast that he can receive the outlet and create 3-on-2 and 2-on-1 fast break opportunities, which he did all game tonight.  Its the kind of basketball that I love.  And while I love JJ, the way he watched Jon Scheyer step in and grab that rebound just bothered me, as I'm sure it bothered him too.  Ish is the kind of player I can see stepping in, grabbing the ball, and being at the other end of the court dropping the ball between his legs to put an exclamation point on the game.

Tonight was a super game, and if I were in the position to give a game ball it would go to Aminu or obviously JJ, but in my eyes the guy who contributed the most to the game in the time he spent on the court was Ish.