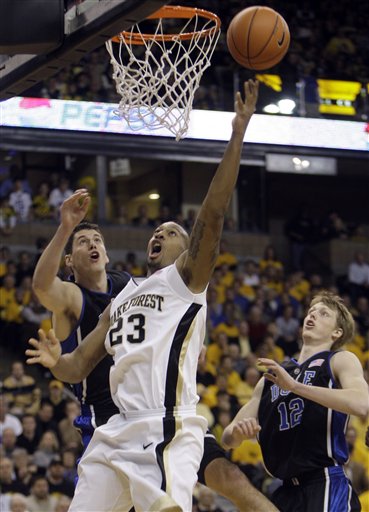 Let's forget the final shot for a bit, James Johnson owed his team that one after one of the weakest rebounding attempts of the game, and let's remember what led up to that moment. Johnson put this team on his back in the premier matchup of this college basketball season.

On a night where Teague wasn't dominating the way the Wake Forest community has come to expect, the Deacons needed another of their stars to step up. James' game answered the call as loudly as his yell post-block on Lance Thomas. Johnson has become one of the elite defenders on the team. Allowing for constant switches on the perimeter against Duke with his foot speed. Then Johnson played inside against Singler at times because of his 6'9" 245 frame. On offense Johnson ran the break well and hit some big shots.

When all was said and done his stat line read:

For as often as the ball was in his hand, he didn't give Duke any opportunities to run off of a turnover. Almost the whole night he spent searching and fighting for rebounds. He didn't force deep shots that were not there, but still created his own shot. One prime example was with 14:20 left in the 2nd half he drove in from the 3pt line and pulled up for a jumper in front of Singler at the foul line, hitting nothing but the bottom of the net. Just as important he hit most of his free throws where others on the team were struggling tonight (Johnson is quietly becoming one of the most consistent FT shooters on the team, hitting 81% in ACC play).

Following the highlight of the game, a between the legs pass by Smith to Aminu for the jam that should be gracing the Sportscenter Top 10 in morning, Duke called a timeout to settle the players while the student section rocked to Zombie Nation. Five seconds after the timeout, on a lazy toss from Nolan Smith to Gerald Henderson, James darted to the ball, poked it away and went in for another exclamation point dunk, giving the Deacs their biggest lead of the game. Throughout the game Johnson had his share of highlight reel plays along with tough inside scoring and rebounding, propelling Wake Forest to its third victory over a top 10 ranked ACC opponent.

And I know I said forget the game winning lay in for James but really we couldn't do that if we tried could we? 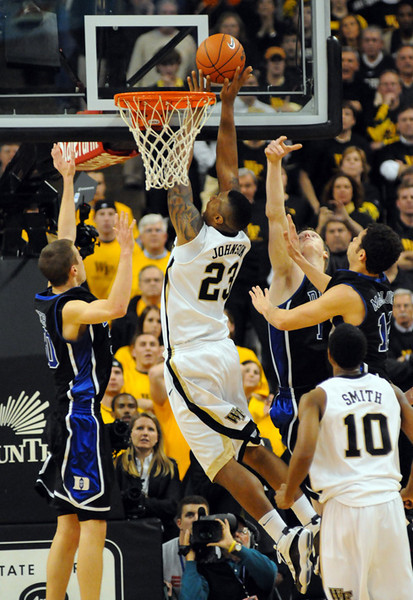 Credit to Bob Hebert for the Game Ending Picture