Wake Beats #1 Duke at the Buzzer

Share All sharing options for: Wake Beats #1 Duke at the Buzzer 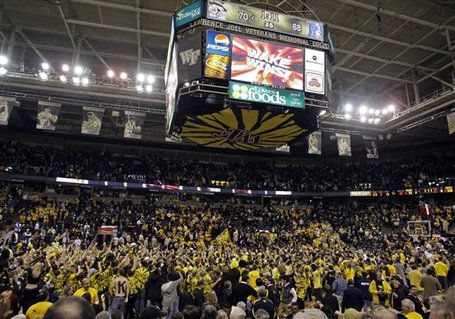 If you told me that Jeff Teague only went 4-14, L.D. Williams only had four points, Chas McFarland fouled out midway through the second half and only two bench players scored points against Duke, (not to mention that Duke would have 15 offensive rebounds), I would probably guess that Wake Forest would have left the Joel Wednesday with a loss.

Look deeper into the stats and notice that Ish Smith finished with seven points and four assists and David Weaver stepped up to have nine points. And the Deacs only turned the ball over 11 times.

There was some defense being played tonight, but not on the last possession, where James Johnson slipped right along the baseline and received a perfect bounce pass from L.D., laying it in, and giving the Deacs, who blew a 13 point lead along the way, the victory over #1.

Sounds just like another classic ACC game to me and one that shows that at least for one year, the balance of power in North Carolina doesn't just belong on Tobacco Road.

In their last five games, the Deacs beat UNC, BC, Clemson and Duke. The loss to Virginia Tech stings, but be honest: did anyone think the Deacs would be 17-1 at this stretch in the schedule and 4-1 in the ACC with wins against the Tar Heels and the Blue Devils?

This team grows every game and Andy Katz is proving to be right when he said after the win against BC that:

Wake Forest has every reason to believe it could be the best team in the country and a potential No. 1 overall seed.

Sure, the Deacs lost against Virginia Tech a week later, but the fact remains: this team has untapped potential that gets explored more with every test.

Freshman Al-Farouq Aminu is certainly coming into his own in the ACC. He had 15 points and 10 rebounds tonight as well as a pair of blocks. He works hard on every defensive possession and is a jump shot away from being one of the greats. Even without it, his length, rebounding and defense (not to mention the ability to slam the ball home) makes him one exciting and wonderful player to watch.

This team works hard and loves playing together. You can see it on the court all the time. James Johnson said after the game:

We treat each other like brothers. [...] When it's black vs gold on the court though, it's war. [...] It goes from the walk-ons all the way up to the star players

Wake won a tough war against Duke on Wednesday night and they showed that tasting their own blood only made them stronger after all.