We're up and we're doing it live. 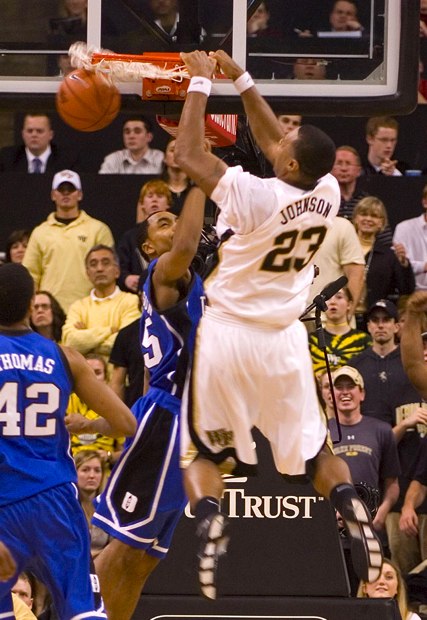 No better way to be up and running than hours away from the showdown between the #4 Demon Deacons and the #1Duke Blue Devils at the Joel. The game is one of the biggest home games that the Deacs have ever had. #1 is coming into town just seven days after Wake Forest, ranked #1 themselves, fell to Virginia Tech. That game left the Deacs with a lot to work on and there is no doubt that Head Coach Dino Gaudio has the guys prepared to take on the Dookies.

Analysis and Prediction after the jump...

Last year at the Joel, Wake Forest had their biggest win of the year over Duke and in the game the Blue Devils had all five starters foul out in route to a 86-73 Demon Deacon win. The collapse after that game has been well-documented, but the win was still on heck of a win and exposed Duke--which had trouble the rest of the season (and lost in the second round in the NCAA Tournament to West Virginia).

This year's game finds both teams at a far different place than they were a year ago. The Blue Devils have been playing absolutely out of their minds since their loss to Michigan--tearing through teams like Georgetown and Davidson and recently laying a beatdown on Maryland at Cameron. They're doing it with a mix of stifling defense and the strong play of their starting lineup--which has seen a big improvement by Scheyer and Nolan Smith and the continued consistency of Singler and Henderson. Zoubek still sucks and Lance Thomas is not very good at basketball, but Duke gets stops, forces turnovers and hits their shots: a recipe that always spells success in the ACC.

The Deacs addressed their two biggest problems from a year ago: depth and defense. The team has bought into Dino Gaudio's defensive philosphy (lifted from Dick Bennett) in which the team uses its length to stop the ball, push shooters away form the hoop, deny entry passes, and stop drives on the baseline. This has led to opponents shooting under 40% on FGs and under 30% on three-pointers. This coupled with this year's freshman class and the explosion of Jeff Teague (not to mention the leadership of James Johnson) has seen the Deacs at 16-1 with wins over Baylor, BYU, UNC and Clemson.

The biggest place to note the improvement of this team is in road wins. The last few years Wake Forest hasn't been able to buy a win on the road, but this year--on neutral and road floors--they have won some very big games: three wins in Anaheim, wins at BYU, Richmond and ECU and ACC wins at BC (first time ever!) and at Clemson. These wins have shown the growth and increased maturity of a team that previously crumbled under pressure.

Virginia Tech aside, this Wake Forest team is very good. The thing is, so is Duke. Duke is well-coached obviously and very disciplined and also has a team (like the Deacs this year) that has bought into the "team" philosophy. This game will be a battle.

1.) Limit Duke to under 40% shooting. Duke hits shots. Plain and simple, and against Virginia Tech, the Deacs did a horrible job of rotation and switching on defense and the Hokies made them pay. Wake Forest needs to get back to playing hard on every defensive possession.

2.) Turn Duke over. If this happens, coupled with forcing Duke to take tough shots, the Deacs will be able to do what they do best: run, run and run. Transition buckets are a big key to winning this game.

3.) Pound it inside. Plain and simple, Duke is not a very strong team in the post. Zoubek is a stiff. Lance Thomas can be pushed around. Singler is good, but he can be overmatched by more phsyical players. NC State had a lot of success just last week by getting the ball inside. Wake Forest, who is bigger, stronger and more effective in the post than State, should be able to exploit this the entire game. This is where they won the game last year and was the primary reason for Duke fouling out their whole starting five. The Deacs need to find ways to get Johnson, Aminu, McFarland, Woods, Weaver or whoever is down on the blocks the ball.

4.) Let Teague go crazy. Teague has seemed to take his foot off the accelerator in the second half the last couple games. Despite his high turnover rate lately, he has done a better job of letting the game come to him, but the problem is that in doing this (and this is James Johnson's biggest problem too), he has gotten too unselfish at times. He needs to demand the ball and go up strong with it without fear. When he does this, the team rallys behind him. Duke plays great perimeter defense, but if you attack the middle, you will have success.

If the Deacs do those four things, with the home crowd behind them, they can win this game and beat a very good Duke team.

Prediction: Despite a tight game, the Deacs will come out for blood and will dethrone #1 on the same floor where they lost their #1 ranking last week.