Share All sharing options for: Possible Duke vs. Wake Matchups

Going into the game tomorrow night there are several questions regarding defensive assignments on both sides.  As with most teams other than Florida State, Wake has the definite height advantage on Duke.  We will likely see many different looks as the teams get a feel for each other in the first half.  From the Deacs' perspective, here's one take on what we will see when Wake is on D.

A look at the starters:

Nolan Smith - Nolan is the one guy who did work on the Deacs last year.  Even though he was not the featured point guard as he is today, he kept Duke in the game last year by driving to the hoop in route to 21 points.  Teague will obviously be matched up with him when the game starts.  While Teague racks up steals, he sometimes gets lost on the defensive end while gambling.  It will be important for Teague to stay in front of Nolan and keep him out of the lane.  The drives and dishes for 3's could prove to be costly for the Deacs.

Jon Scheyer - This is where it gets interesting.  The possible candidates for this assignment range from James to LD to Farouq.  After waffling back and forth, I ultimately think that James will start out on Scheyer.  JJ has proved to be very effective guarding perimeter players this year other than a few slip-ups against AD Vassallo.  His length will bother Scheyer's shot and I think he has enough athleticism to stay in front of him despite being significantly taller and stronger.

Gerald Henderson - Henderson has been playing at a very high level lately.  That's why I think LD gets this responsibility.  LD has a knack for getting under the skin of the opposition and frustrating him throughout the game.  As the heart of the Deacs, I think LD is up to the task.  Of course, if he gets beat off the dribble there are about 24' of arms there to assist him.  If we get about 8 LD chest thumps, we will be in good shape.

Kyle Singler - Singler's versatility bothers many opponents because bigger players cannot stay in front of him and he can shoot over smaller players.  While James did a great job on him last year and may wind up with the assigment again, I think Farouq gets the nod here.  As Jay Bilas might say, Aminu's length is tremendous.  Physically, he will not have any problem defending Singler.  However, he will have to give his best effort 100% of the time because Singler does not quit on any play.  This is a matchup of two NBA first-rounders that will go a long way in determining the outcome of this game.

Brian Zoubek - Brian Zoubek is terrible at basketball.  This is the only area I am not concerned about in the least.  The only bad result here is that Chas gets in foul trouble early.  Chas has a terrible reputation and we need him on the floor in a bad way, as evidenced by the VT game.  If (when) Chas gets in foul trouble TWoods and Weaver should not have a problem with Zoubek either, but it will hurt us on the offensive end.

This is how I see the initial matchups of the starting five.   Let me know what you think! 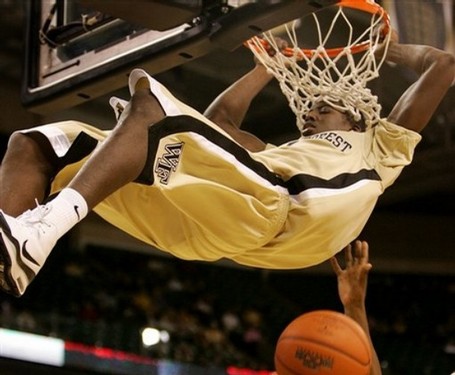